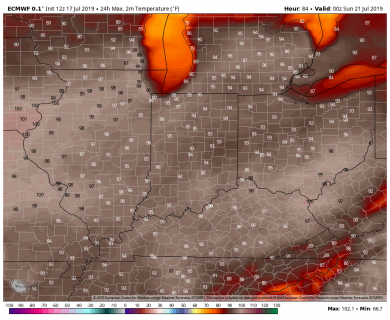 Heat builds over the next 3 days. Temps will be well above normal, with daytime highs from 90-97, and heat indices in the triple digits. Overnight lows tonight and tomorrow night will be between 75 and 80 degrees, which will not be liked by row crops. We do have a threat of afternoon thunderstorms this afternoon over about 60% of the state, but those thunderstorms will be very segmented – very hit and miss. Humidity values will be high the next 3 days, the heat will be dangerous. The map above shows high temps for Saturday.

Sunday a frontal boundary coming from the NW will interact with the hot air from the next 3 days. The result will be chances of thunderstorms through the day, starting in the morning in the north, but then seeing more frequent and stronger thunderstorms statewide Sunday afternoon and evening as the front works south. Rain totals can be from a few hundredths to .75” over 80% of the state. But we can see sunshine in there two…its just going to be a hodge-podge through the day.

Monday will turn out partly sunny over most of the state, with showers and thunderstorms lingering only near the Ohio River in the morning. Then we stay mostly sunny and dry for Tuesday through next Saturday. Temps will be cool early in the week behind the Sunday front, but will start to warm considerably Wednesday through next weekend. We expect to be above normal again in that period.

For the extended window, we have increasing clouds on Sunday the 28th, with thunderstorms developing in the afternoon. That moisture only totals from a few hundredths to .3” over 60% of the state. We actually will skew that 60% coverage more north than south. For Monday and Tuesday, we turn out partly sunny in the north, but have to watch for scattered showers and thunderstorms each day from I-70 south, with up to half an inch on Monday the 29th and up to .3” for Tuesday the 30th. The rest of the extended window is mostly sunny and dry as we finish July and move into August.

Moisture truly looks to be at a minimum over the next 2 weeks…if we have to rely on thunderstorms to get the best rains, that means there will be a lot of disappointment…as those thunderstorms have the uncanny ability to miss so much of the region at any given time. In addition, the heat is a huge story. It will be talked about a lot over the coming 72 hours, but we are looking ahead to late next week already, and we think it is possible to see another significant push of hot air again then.