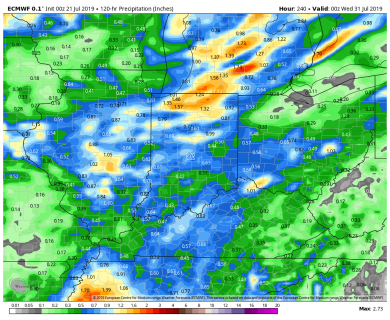 A frontal boundary finally arrived in the state yesterday afternoon, signaled by showers and strong thunderstorms. The rains are trying to leave the state this morning but may linger in some areas through midday in the north and east, and into early afternoon over the southern third to quarter of the state. Additional moisture today should be limited to a quarter to half inch, although any thunderstorm, particularly in the south will have the potential to blow past that top end of the range. If you are in an area that is missing the rain or farther west where rain is already done, we will see partly sunny skies emerge, and those will be in control of the entire state by sunset.

Dry the rest of the week, tomorrow through Sunday. Temps today and tomorrow will be in the upper 70s, and then we move into the 80s for Wednesday-Friday, but will slowly get a few degrees warmer in that zone each day. Late week – Saturday and Sunday, we can see temps at least in the upper 80s and we likely have to leave a chance for some temps in the 90s. Humidity values will be low this afternoon and tomorrow but will slowly build through the end of the week and weekend as well.

Early next week, the pattern looks like it wants to get more active, but models are struggling with just when rains return. There is a good front off to the north and west to start things off Monday. Models are trying to advance that front in for later Monday into Tuesday, but there is not good agreement on the frontal passage south and east. Right now, we will pencil in showers and thunderstorms Monday afternoon and evening, with rain totals of .25”-1” over 80% of the state. The map shows rain potential from tonight through the next 10 days. Now, if the front sweeps through like we expect, that will lead to a drier push again next Tuesday and Wednesday. The concern here will be the front not definitively coming through Monday afternoon, but instead slowing, and putting us in the warm, moist sector for multiple days which would allow for more hit and miss thunderstorm action. This would be similar to what happened last week with the warm/hot air over the region.

The extended pattern shows a much more unstable set up. This means we can not rule out scattered pop up showers and thunderstorms from next Thursday through the weekend into early the week after next. Right now, the set up looks like it would only support 30% coverage of these pop up clusters, but we also can’t rule them out anywhere either. This kind of pattern would have high humidity and above normal temps with it as well.