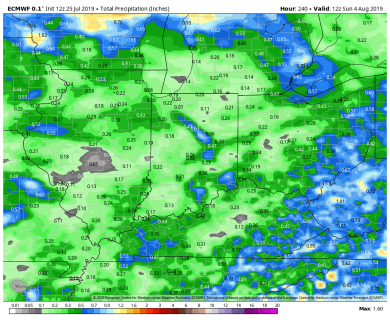 We are making a few drier changes in the forecast this morning. That right off should tell you there are no changes to the immediate short term part of the forecast. We continue to look dry through the weekend. Temps will be climbing a bit more today, and humidity values also are starting to work higher, meaning we should see our conditions be just a little more uncomfortable through the weekend too.

Our next front is still on track to move into the state early next week. WE still think the best arrival time will be overnight Monday night through Tuesday. Clouds will be increasing on Monday, but it still will be plenty warm. WE are pulling back on rain totals now for the frontal passage, with expected rains from a few hundredths to .5” and coverage at 60% of the state. The front just does not look as impressive, and we think the thunderstorm threat is low. There will be plenty of holes in the coverage too as the front sweeps through from NW to SE. So, we are just making this step this morning to mirror that reality.

Behind the front, we go predominately dry again for Wednesday through Saturday. Temps remain above normal and our humidity values stay high, and that leads to s bit of instability over the region. Because of that we can’t rule out a few pop up showers in that period, with a better likelihood of that Wednesday into Thursday rather than Friday and Saturday. But, to be clear, we think the majority of the state stays dry for the entire 4 day stretch.

The only other chance of rain we have in the forecast right now comes with another front for next Sunday, the 4th, a system that we are pulling forward one day because of faster development and tracking. This is the system we had penciled in for Monday the 5th in yesterday’s forecast. This front has potential for .1”-.6” rain fall from showers and thunderstorms with coverage at 60% of the state. This front moves through fairly smoothly and will then lead to another push of drier air behind it. The map at right shows rain totals through the 10 day period. These totals are below normal and below what is needed, especially if temps continue to climb, as we expect.

The extended period looks similar to the 10 day pattern. For the week of the 5th, we see mostly partly sunny skies, but humidity and warm air will make it so once again we just can’t completely rule out scattered showers for the Tuesday through Friday period. Coverage remains around 30% (or less) and the better chances still look to come for the Tuesday-Wednesday (6th and 7th) period vs. later that week.

We referenced temps above… we will see 90s return to the state later this weekend and early next week, and the behind the frontal boundary passage, we see another surge of warm air later next week into the weekend, with another round of 90s over a large part of the state, coming in from the west and south.