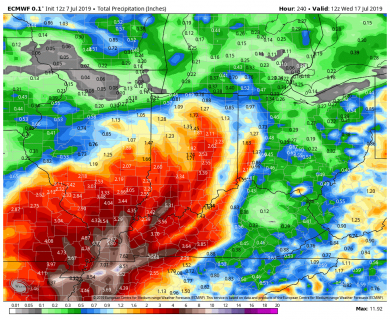 Our weather pattern looks to calm down and dry out some over the coming week to 10 days. In fact, in the next week, we have only one well organized chance of moisture for the entire state, and the totals there are significantly lower than our look at the same system last week. So, it seems we finally are trying to morph into some semblance of a normal July weather pattern.

We are dry today, tomorrow and most of Wednesday, as sunshine dominates. We saw a different airmass move into the state yesterday behind the frontal passage Saturday. This will lead to lower humidity values still over the next 3 days, although we will slowly walk those humidity values higher the closer we get to Wednesday. Clouds will also begin to increase Wednesday midday and afternoon.

Our one organized chance of moisture over the next week comes late Wednesday night into Thursday, as a cold front looks to sag through the state. This front looks significantly less impressive than it did last week, and at this point we would suggest only a few hundredths to .3 or .4” across 60% of the state. Those totals are lower and the coverage well below our look from last week. There will be plenty of areas that miss out on that action.

Behind that front, we go dry again for the balance of Thursday afternoon, Friday and then the weekend too. Humidity values back off, and we should see good evaporation. That will be another good window for field and forage work.

Early next week looks interesting. We are watching a tropical system that seems to be headed for the gulf coast areas late this week and weekend. That storm is being projected to move north, and its remains may make it through the Tennessee valley and into the lower Ohio valley early next week. IF that comes to be, that would spell showers for southern Indiana, mostly the southern third, next Monday, and then a slow spread north through Tuesday and perhaps Wednesday. However, without that tropical moisture pushing north, we will continue the dry pattern. There is a cold front that looks to threaten near the end of the 10 day window that can bring a few scattered showers, but only has about 50-60% coverage without moisture flow from the south. So, at this time we feel comfortable saying northern parts of the state are dry into the start of next week, but the jury is still out on southern parts of the state. The map above shows 10-day rain potential and includes some tropical influence on Southern Indiana at this time.

Temps over the next 10 days will be near normal. As humidity builds, we have to leave the door open to temps feeling much warmer than normal, but we think overall, this is a typical July set up on temps. The combination of temps and some rain free days should be very beneficial to a large part of the state.