We are going drier in our forecast outlook this morning. In fact, there is an increasing likelihood that we make it through the next 2 weeks with only one chance of moisture, and that chance is not all that spectacular.

This week looks mostly dry beginning to end. South winds picked up yesterday over the state as we moved fully on to the backside of high pressure. Those south winds will dominate the rest of the week, taking temps to above normal levels. We expect highs today through Friday to be in the upper 80s to very low 90s statewide. This may allow for a slight increase in instability over southern Indiana late this afternoon and tonight, and in central Indiana late tomorrow afternoon and tomorrow overnight. However, while we need to keep an eye out for an isolated shower or thunderstorm due to that heat-based instability, we do not think there is really any true threat of significant action, and we are keeping out general forecast dry. No threat of moisture midweek through Friday. 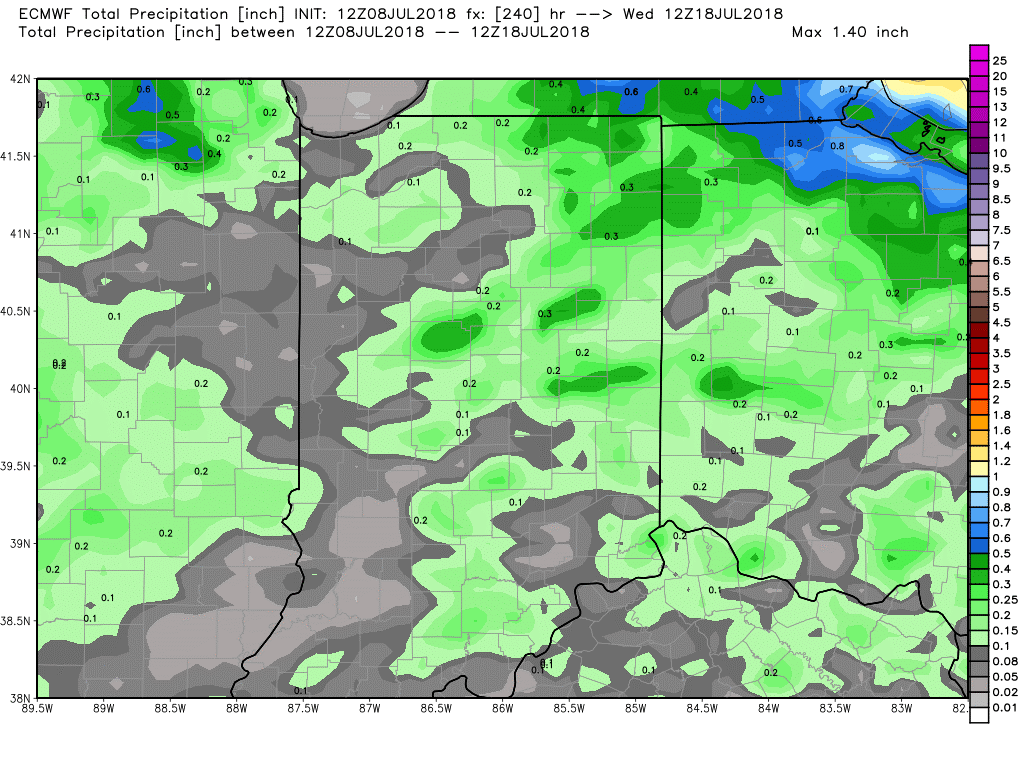 The weekend looks pretty dry at this point too, as our front that was trying to work in is falling apart and puts its moisture down farther west. So, while we see some pop-up clouds here and there, any organized precipitation stays at bay through Saturday, Sunday and the daylight hours of Monday.

Our one threat of moisture develops Monday evening into early Tuesday. Moisture is not impressive, a few hundredths to a quarter inch tops, with coverage 60% of the state. There is an outside shot that the northern third of the state can duplicate that kind of set up 24 hours later on Tuesday night into early Wednesday, but moisture is no stronger, meaning the chances at anything combined over half an inch is incredibly small. The map below shows cumulative rainfall through the next 10 days.

We are dry the rest of the 10-day period through early Thursday next week. Then, in the 11-16 day window, we see more of the same, with strong high pressure holding through at least the 22nd. There is a front looking to sag into the state around the 23rd and 24th, near the end of the extended period, that – if it holds together – can bring half to 1” of rain. But, that has a very low chance of holding tougher at this point, especially given that our atmosphere will be very, very dry by then.

Temps look to average 2-5 degrees above normal through the next 2 weeks. So, heat will be a bit of a story, but excessive heat like last week and prior does not look to be developing at this time. Still, the lack of rain, while corn tasseling and pollination is ramping up, does not put us in the best of spots. It would be nice if we could come in tomorrow morning and see better moisture magically appear. However, its not likely.