Scattered, light moisture should continue to hold over the state today. This will promote an overall damp feel once again, as temps stay at normal and even slightly below normal levels across the state and we can’t rule out a few hundredths to a tenth or two of precipitation. Generally, though, we should see limited rain activity, with most of the moisture just getting held up in the atmosphere. We will start to see some changes to the pattern starting tomorrow. 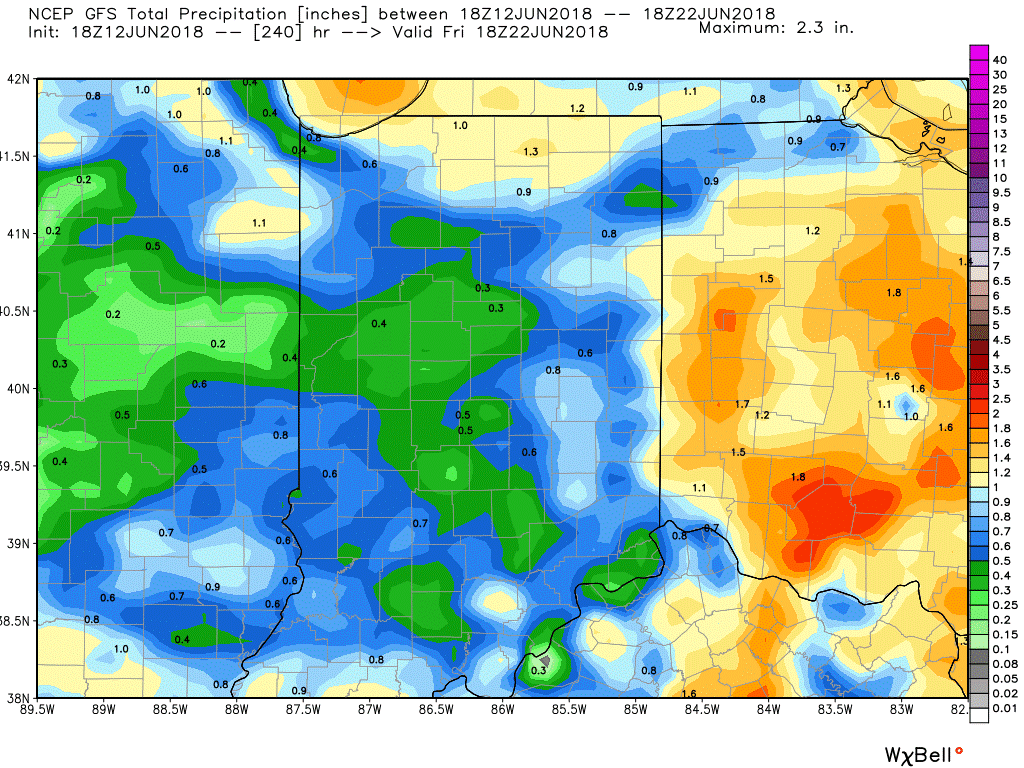 Tomorrow looks completely dry across the state and we start to see some southwest winds bring some higher temperatures. We can expect temps to be above normal for Friday, Saturday and into Sunday. The heat can trigger some scattered shower and thunderstorm action. The best chances will be with the warm front early Friday morning and midday, and then again Saturday late afternoon/evening. Coverage out of both chances looks to be only about 40% of the state, but with heat-based instability, you have to expect the unexpected, so we won’t rule out a thunderstorm anywhere, particularly late Saturday.

Dry weather returns with another hot afternoon on Sunday, and temps ease a bit on Monday, while we likely stay dry. There is still the potential for a good chunk of next week to have moisture around, but it is shifting later in the week by a day or two.

We can’t rule out showers moving into the state late Tuesday afternoon, then we have rain chances for Wednesday and Thursday. However, these are not rains that develop with a sweeping type front. Rather, moisture is going to try and slowly lift up into the eastern corn belt, and we will see multiple lines of action rotating through, circulating around a low to the south. This set up means we see largely hit and mis rains each day, but the areas that get rain can get a lot. Think of it as a bunch of striated bands of moisture training over the same area for a while before leaving. This will promote rain potential for the 2-and-a-half-day period of as little as .25”-.5” all the way up to 2 inches or more. So, we still have the potential for a very wet week next week. Combined coverage though will be only around 70%, with daily coverage at 40%. Dry weather makes a comeback late next week. The map shows 10-day cumulative rainfall potential across the state.

In the extended window, one main front now arrives around the 26th that can bring rains of .25”-1” over about 80% of the state.

Temps will be a story going into the weekend. We are already hearing folks talk up very warm air in the plains and western corn belt this weekend. We will see warming as well and can see some upper 80s to lower 90s. However, we need to stress that this is not a major problem. It is Summer, and summers have some hot spells, usually. This warmth will be coming after a relatively wet period over most of the corn belt, including Indiana. So, crops should handle 3 days of warm air just fine. As to the increasing fearmongering over a blazingly hot rest of June and all of July…we find nothing to support that kind of talk and consider it foolishness. For the next 10 days to 2 weeks, at least, we see conditions good for crop growth and development. Not perfect, but good.