Mostly dry today through the weekend. Notice we say, “mostly dry”, though. That is because as temperatures warm, we still can’t completely rule out some heat-based pop up showers or thunderstorm. These mostly likely will be over western Indiana here in the short term today, with action in Illinois drifting across the state line into the state. But tomorrow we can’t rule them out either, and those could pop up anywhere in the state. However, coverage is not spectacular either day. If these pop up, coverage will be 20% of the state or less, hence our “mostly dry” forecast. Temperatures climb a few degrees each day, and we will see the entire state in the 90s on Sunday, as shown by the map below. Monday will be equally dry, but clouds will be starting to build, and that will keep temperatures from equaling Sunday. 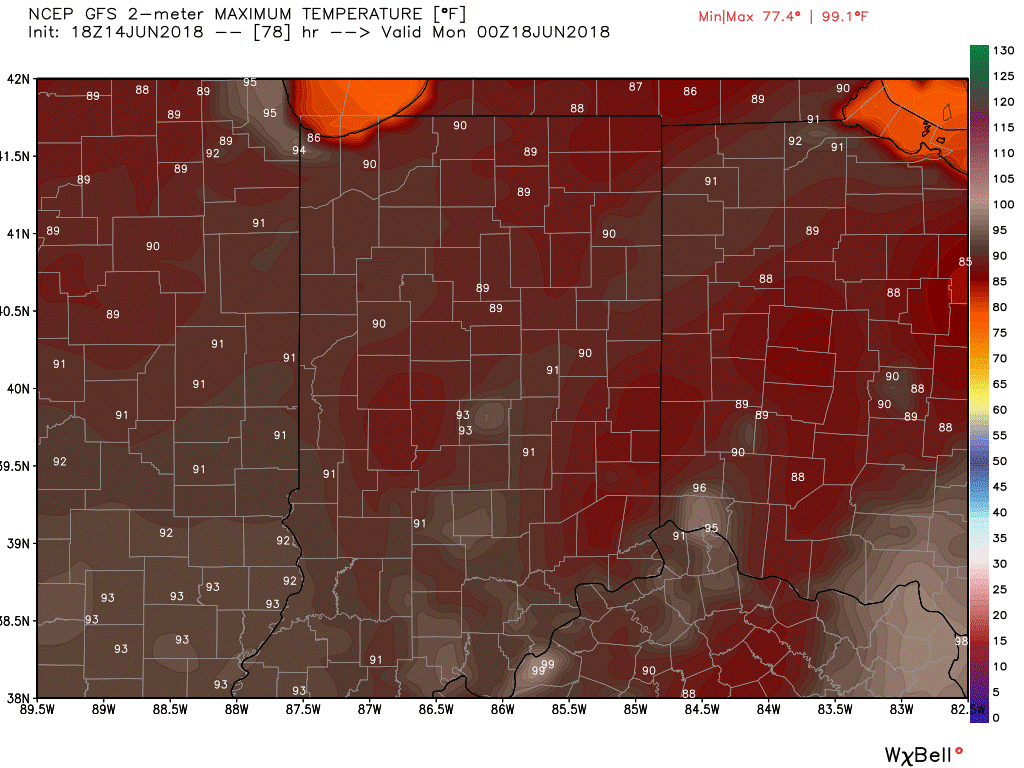 Our net good precipitation threat enters the state Monday night with scattered showers and thunderstorms in far northern Indiana. Then the system sags southward through Tuesday and Wednesday. Rains Tuesday will be statewide, and the Wednesday action will be mostly limited to the southern half to third of Indiana. Rain totals for the 2-and-a-half-day event will be from .25” to .75”. Coverage will be 90% of the state.

We are trending Thursday drier and will keep Friday Dry as well. Temps will be near normal.

For next weekend, we have scattered showers in Illinois trying to drift into western and particularly west central Indiana. Coverage will be 30-40% or less of the state for the weekend, and Sunday we can see some of this settle in over the far northern tier counties of Indiana as well. Moisture totals look to be mostly .4” or less.