We have a soggy, active pattern now settling in over the state for the remainder of the week, this coming weekend and early next week. We have no significant changes to our forecast thought process for today through next Monday. There is some model divergence for the Tuesday-Wednesday period next week that we will address later, but this morning, we are leaving our forecast for that part of the time frame alone as well.

Rains started in northern Indiana last night, as anticipated. From here rains today will be slowly working southward but should stay mostly north of I-70. We say mostly, because we are not going to rule out scattered showers south of there, but by far, the best action today will be over the northern half of the state. Tomorrow, scattered showers and thunderstorms will still be around, but will have more of a bias toward central and southern Indiana. That is not to say we won’t see some action up north…but the best chances tomorrow are central and south. You get the idea. 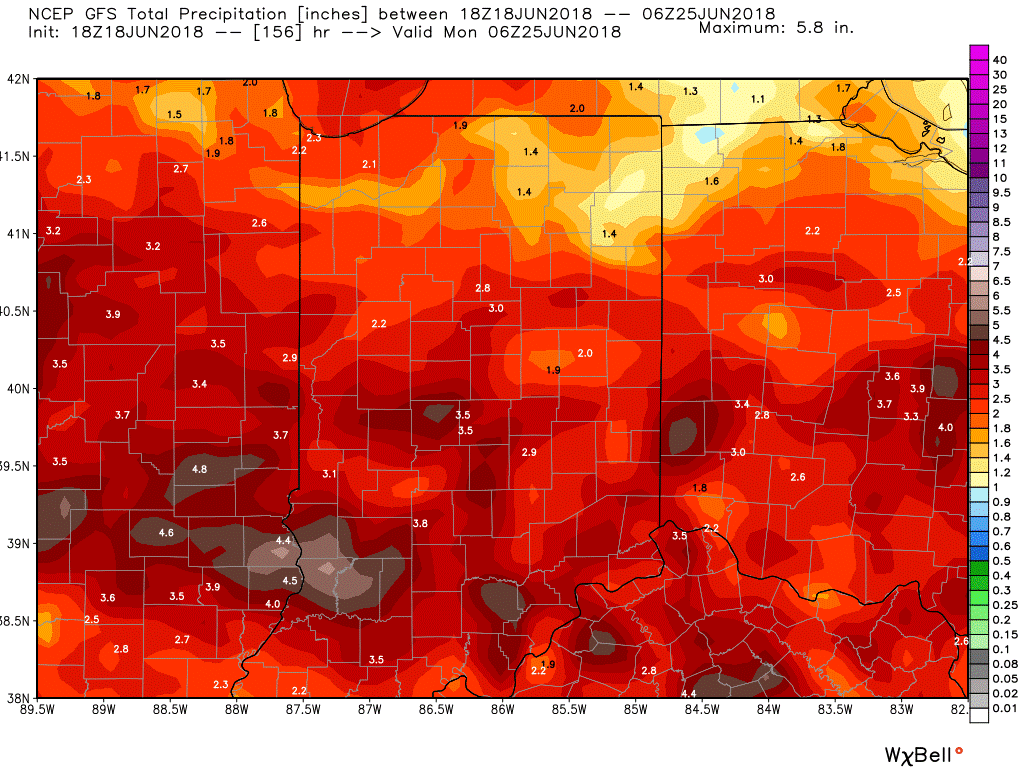 Saturday, we kick off the weekend with only scattered showers. Coverage for Saturday is not all that impressive, and we may see more dry areas than wet. But, the pattern still is rather unstable, and with a good moisture profile in our atmosphere, we would not count on any large-scale dryness for Saturday. Sunday should be dry over the northern half to two thirds of the state, but we see scattered afternoon showers and thunderstorms over the southern third of Indiana. Monday, we start off next week with scattered showers, but also a mix of clouds and sun, as action looks to wind down.

All told, from today through next Sunday at midnight, we are looking for an inch and a half to 3.5 inches of rain over 95% of the state. See map below. We think 4 inch totals are likely a little too zealous at this time, but will keep an eye out.

For the Tuesday-Wednesday period, we had been going dry, and will leave that forecast alone this morning. However, there is significant model disagreement over that period, with one model staying dry, like our forecast, and the other going very wet. In fact, if that other model would turn out right (it’s the European, so we are not discounting it completely this morning, we just are not ready to change our forecast whole heartedly to its solution) we could add another 1-2” to those aforementioned totals!

Sunshine is back for Thursday. The extended 11-16 day period may kick off with a few scattered showers over the state, but then we are dry for the 30th through the 3rd, as our next strong front starts to fall apart. Strong surface high pressure looks to build in over the eastern third of the country over the latter half of the extended period, and that will be tough for any front or moisture to overcome. That leads to a return of warm air for early in July.