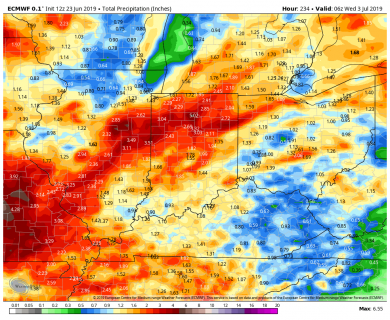 Rain and thunderstorm action continues to work through the state today. The moisture developed yesterday with some varying intensity, including a tornadic supercell near South Bend. Today, we could see another batch of stronger thunderstorms this afternoon and evening, and the threat looks the greatest from northeast Indiana back into central parts of the state. Today’s rains will bring an additional .25” to 1.5”, with the upper end of the range coming with the stronger thunderstorms.

We try to go a little drier for the rest of the week, and we do not see a large threat of well organized precipitation around. Tuesday we should be partly to mostly sunny in the south and see a mix of clouds and sun up north. Wednesday the south remains partly sunny, but in the north, we will likely see the effects of a system moving out of the upper Midwest across the great lakes. This should produce scattered showers over the northern third of the state through the day, with rain totals from a few hundredths to .2” and 60% coverage. Overnight Wednesday night this light action may make it down to I-70 before falling apart. Thursday should be partly to mostly sunny statewide.

On Friday, you can expect partly to mostly sunny skies again in southern Indiana, while the rest of the state sees sun followed by increasing clouds. Showers move in by evening over the northern part of the state, and slowly move south overnight to near I-70. We expect a few hundredths to .4” with 70% coverage. Then on Saturday, showers develop and continue through the overnight period into early Sunday. Rains there can be from .25”-.75” with coverage at 90%. The rest of Sunday we see skies turn partly sunny in the north, but showers remain scattered across southern parts of the state, bringing an additional .1”-.3”

Monday starts of next week with partly to mostly sunny skies, and that holds through most of Tuesday as well. Clouds will increase Tuesday afternoon. For the evening and overnight hours next Tuesday night, we can expect showers and thunderstorms. Data suggests a strong thunderstorm cluster moving across the state that has potential for strong and severe weather. If it all holds together, there is rain potential there from .5”-2” ad 70% coverage. But, time will tell, especially on the strong to severe part of the cluster. Stay tuned. Next Wednesday finishes the 10 day window with a mix of clouds and sun, but we also can’t completely rule out the chance of showers.

Temps through the coming 10 day period look to be mostly near to slightly below normal. We maintain our thoughts that GDD’s will not be above normal at all over the next 2-3 weeks. This pattern is one that has a little more promise of good growth and development potential, but field work potential probably now turns the focus more toward cultivation, fertilizer application and spraying, rather than planting. The rains are still too much to allow for large scale planting or replanting. The map shows 10 day rain potential over the state.