The forecast looks a little better this morning as our pattern at least makes an attempt at being drier. We do get full sunshine today over the entire state behind a frontal boundary that swept through overnight. That front was responsible for triggering some thunderstorms, but there were at least a few holes in coverage of that moisture. Today high pressure takes control.

Sunshine rolls right into the start of the day tomorrow, but we still have a system moving out of the upper Midwest across the Great Lakes. That will allow for some cloud cover and minor moisture to sag slowly southward. Because of that, we can’t completely rule out a chance of scattered showers late tomorrow afternoon and evening, but the moisture is very minor. We expect a few hundredths to .2” with coverage at only 50% of the state. If you happen to be able to miss that, you will be in good shape going forward.

Four dry days are expected back to back to back over the entire state from Thursday through Sunday now, as we see a little bit of a pattern change. This period will feature good evaporation and plenty of sunshine. Temps will be near normal. This will be the longest dry stretch the entire state has seen in weeks.

Moisture returns for the start of next week. Scattered showers Monday will bring a few hundredths to .3”, but only to 40% of the state. Generally, we see the chances of showers staying north and east of a line from Gary to Cincinnati, but even in those areas, coverage is not spectacular, and obviously, the precipitation will be light. If it comes after 4-6 dry days (depending on your luck tomorrow), that moisture will actually be welcomed. Tuesday features partly sunny skies statewide, but clouds will be increasing in the afternoon. Scattered evening showers are likely from I-70 southward but will trigger only a few hundredths to .2” and 40% coverage there. So, once again, this moisture is not going to be exceptionally problematic.

The next chance of well organized rain for the entire state comes next Wednesday. We have a nice frontal complex moving in and it will produce rains of at least .25”-.75”. The question here will be thunderstorm development. If we see storms, where to they go, and what kind of heavier moisture do they produce. That will be a question that can only be answered closer to the system’s arrival. For Independence Day next Thursday will turn out to be a pretty good day, with any morning showers leftover from the Wednesday system leaving quickly and being replaced with sunshine. The map below shows rain potential through July 4th. 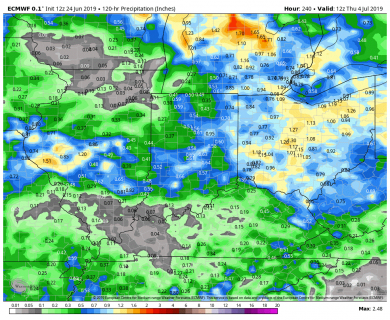 The extended 11-16 day forecast starts off with a continuation of dry, sunny weather for July 5th. The holiday weekend gets interrupted by scattered showers for Saturday the 6th bringing a few hundredths to a quarter of an inch with 60% coverage. However, this may turn out to be the only significant rain potential in the entire extended window. We look for sun to return Sunday the 7th, and then the pattern stays partly to mostly sunny and dry for the first half of the following week, Monday the 8th through Wednesday the 10th. Temps overall remain near normal on through the extended period, which means we still do not see any excessive heat building here.