The forecast pattern has become somewhat stupid this morning. Here is what we mean. Every model out there has a completely different take on what is going to happen, not just in the next few days, but all the way through the coming 10-day window. All of them have some combination of 3 systems working in, but timing is all over the place. Also, intensity of the precipitation sits in a wide range. Part of the problem is that we have a fairly distinct frontal boundary setting up between Canadian air and warm, moisture, juicy air from the south. But, that difference in airmass is not the only catalyst. Rather than try and take our forecast day by day, we think it best to step back a step or two and attack this from a multi-day period. In terms of coverage, it is key to note in our forecast this morning that there are two cold fronts draped across the upper Midwest and across northern Illinois into IA that have stayed in the same general area for a couple of days. WE think this area will be a starting point for action going forward. 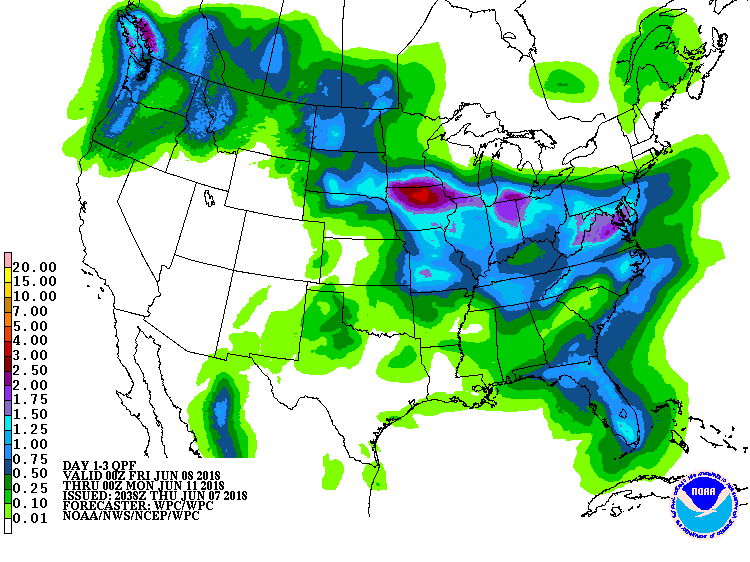 So, first off, there is a good threat of rain over the state from today through Sunday. Today and tomorrow we may end with better rains in the northern part of the state (closer to that stationary to slow moving frontal complex off to the northwest), but we will not rule out chances anywhere. Today looks wetter than we had been talking earlier in the week, a function of increase instability over the eastern corn belt. Rains on Sunday may focus a bit farther south, but still, we don’t want to expressly leave moisture out of any one area. Combined 3-day rain totals will be generally .25”-.75” unless we get thunderstorms to fire off, which we believe there to be a good chance of. With thunderstorms, rains of 1-2 inches are easily possible going into the weekend. Coverage of rain on any given day will be no more than 60%. The map is a general representation of moisture through Monday morning

Our next chance of rain comes next Tuesday, plus a 12-hour window on either side of Tuesday. These rains look to be more shower related, but we still won’t rule out thunderstorms, giving a rain potential of .25”-1”. Coverage again is somewhat hit and miss at 60%.

Then system number 3 can move through late next week into the weekend. This one has rain potential of .25”-.75” again with coverage at 70%.

Overall, you will notice that we have a good amount of moisture in the forecast. Where we have problems is with timing and coverage. Over the 10 days combined, we likely see 90% coverage over the state with rains over an inch but those will come at various times and rates. In addition, the amount of drying between systems will be limited, at least in terms of number of days that the entire state can stay dry.

For growing and developing crops, this forecast is pretty good. If you still are trying to get some seed in the ground…you will have a bit of a challenge.

No change for our extended forecast. 2 systems roll through. The first is a cold front around the 18th bringing rains of half to 1 inch, and then a second cold front for the 21st and 22nd has .25”-.1”