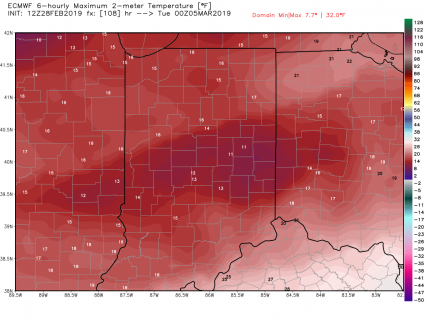 No significant change in the forecast this morning. In fact, we just are zeroing on how this snow system shakes out this weekend, and really have no need to change up anything else. Today will be pretty benign, with clouds and some sun. We stay seasonally chilly, and there is not much to talk about. Clouds will be thickening and increasing tomorrow ahead of the Sunday system.

Our final look at Sunday tweaks precipitation just slightly. Snow still starts Sunday morning in SW Indiana, and spreads north and east from there. We end up with at least some precipitation over the entire state, but the snow accumulation break down comes as follows: We see a coating to 2 inches from US 24 northward. That part of the state really dodges a bullet this time around. From US 24 southward, we are projecting 2”-5” generally, and won’t rule out a few embedded 6 inch totals farther south. The heaviest snows will be in southern Indiana, and if we do see some 6 inch totals here and there, they likely will be near or south of the US 50 corridor. That being said, the heaviest snows in an event like this always take place very close to a changeover to rain…so that is why we think that it’s going to be tough to see lots of 6”+ snows down south…because we think we could change over to rain very easily near and south of the OH river.

No change in the outlook for the start of next week…we still look dry and cold. We are keeping temps similar to our look 24 hours ago for the Monday-Tuesday period. We expect high temps for Monday to be in the low to mid teens, and highs Tuesday will be in the mid to upper teens. The map at right shows Monday’s potential daytime maximum temps. Overnight lows Monday night will range from 5 above to 5 below. This will be the coldest air since that late January cold snap. We still expect some lake effect snow showers Tuesday in the typical areas of northern Indiana and are allowing for some of that to drift southeast Tuesday late afternoon into east central parts of the state. However, it is only a few flurries by that time. We won’t rule out a coating to an inch from SR 14 north in typical lake effect snow areas. Wednesday stays dry and may not be quite as cold.

A quick moving system brings increasing clouds on Thursday, and the chance of scattered snow showers for Thursday late afternoon and evening. Amounts will be limited to a coating to an inch. We move right back to partly sunny skies next Friday.

Next weekend we have rain for Saturday and Sunday and Sunday both with our next system moving in rather quickly. There will be a significant surge of warmer air from the south ahead of the circulation, allowing temps to moderate quickly. At this point we are still looking for rain and perhaps thunderstorms in southern Indiana, but keeping an eye out for snow up north. Liquid totals will be from .25”-1” at least.

The rest of the extended 11-16 day period goes as follows: Scattered snow showers for Monday the 11th with only minor accumulations. Then for Tuesday the 12th through that Friday, we see cloudy to partly sunny skies with the potential for a few scattered snow showers each day, never any with significant accumulation potential. Temps stay on the colder side of normal.