Drier weather settles in over the state starting today and it should hold through the end of the week. West winds today will be a bit brisk, but they will also allow temps to bounce a good 5-10 degrees over yesterday. WE should see temps in the lower to middle 40s for most of the period in the north, 50s in the south, while sunshine is the main component of the forecast today, tomorrow and Friday.

A little bit of a change in our forecast this morning for the weekend. On Saturday, we have a wave lifting up into Indiana that is part of a stronger system passing by to the south. This will bring clouds to a large part of the state, and a chance of rain from I-70 southward. Rain totals do not look to be too spectacular, but will register from a few hundredths up to a third of an inch. In northern Indiana we see no rain, just off shoot clouds. We are back to dry weather statewide for Sunday. Weekend temps are not that impressive, mostly near normal. Saturday would have potential to warm further, except for the clouds from the southern wave.

Our next strong low is on the way, but still looks to have most of its impact come late Monday through Tuesday. On Monday, we could see some strong south flow ahead of the low, bumping temps slightly. The best chance for warmth on Monday will be in southern Indiana, while we see less of a move up north. Clouds will be building through the day. Then when precipitation does break out later Monday night and/or Tuesday, we should see generally rain. We are keeping rain totals at .25” to .75” with coverage at 80%. We dry down late Tuesday afternoon and stay dry through the end of the week. The map below shows combined rains from the system Saturday and the system next Monday night and Tuesday. 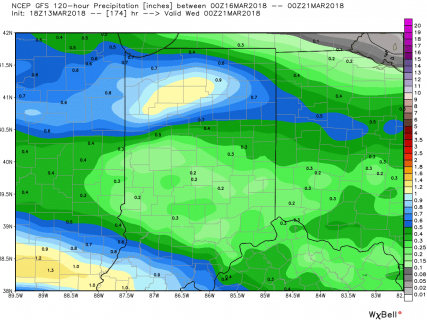 Our next chance of well-organized precipitation comes for the 24th. A strong low exits the central plains, but its northern push is not as prominent. This means the low is tracking more toward the Ohio Valley. This would put 1-2 inches of rain into the Deep South, but would dramatically reduce action in the eastern Corn Belt. This bears watching. This track also is altering the later stages of the extended period. A front for the 27th now has low pressure staying north in Quebec, and the front slowly sagging south. This would bring slow moving, light rain to Indiana around the 27th through the 29th, but we may see rain totals at under .25” on any given day with coverage at 70%. The gulf is cut off in this scenario, meaning moisture is not nearly as impressive, but adds up. This is a period to watch, but looks less active than 24 hours ago.