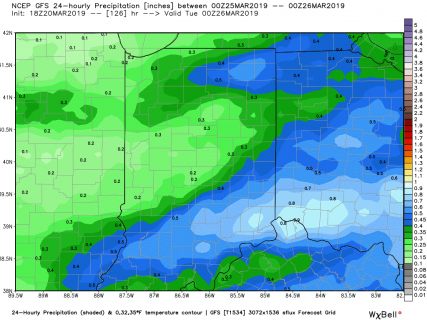 Clouds give way to sun today, behind the system that brought light precipitation to the state yesterday. We start off this morning with plenty of clouds over the region. We can’t rule out some scattered showers today, mostly in east central and southeast Indiana, but it would be foolish to limit them to just those areas…especially this morning. So, keep your eyes out for a renegade bit of moisture this morning, with lessening chances through the rest of the day. Sunshine becomes most likely later this afternoon and heading toward sunset. Partly to mostly sunny skies are anticipated tomorrow, Saturday and the first part of Sunday. Temps will be warming.

Clouds begin to increase Sunday afternoon, but we will stay precipitation free until after sunset. After sunset through midnight, a few scattered showers develop, but the real rain maker arrives for Monday. The rain reaches 80% of the state and will yield .25”-.75” of total moisture. This is down from our prior forecasts. The heaviest rains seem to want to take a more southern route, staying south of the Ohio river…which is fine with us. Everything should be done by Monday night. If we have any concern about this system at all at this point, it would be the colder air coming in behind. We have a bit of a worry that the rain can end as some wet snow… but want to see more evidence of the potential before really talking too much about it. The map at right shows 24 hour rain totals ending at midnight Monday.

Tuesday turns out partly sunny, and then we see sunshine through Wednesday and Thursday. Models diverge in their outlooks there, with the European looking drier, and the American models going wetter, WE think that the risk of extraordinarily high rain totals is lower this morning, but we still like a nice system coming through right there in the same window we have been talking about tot this point. WE look for scattered showers to develop overnight Thursday night through Friday, and then rain continues Saturday and Sunday (the 30th and 31st). Rain totals are still being defined, but we think we can see .5”-1.5” over the 3-4 day period combined. Coverage will be nearly 100% of the state, although on any given day, the 24 hour coverage may be closer to 65-70%.

The heart of the extended period is drier this morning, with sunshine dominating for April first through the 3rd. Clouds begin to build on the fourth, and then we have a chance of rain from overnight the 4th through the 5th of April. Rain totals up to at least half an inch are expected.

So, our outlook may not be as extreme on the rains next week, but we still have plenty of moisture coming this week, starting early next week, and culminating next weekend.