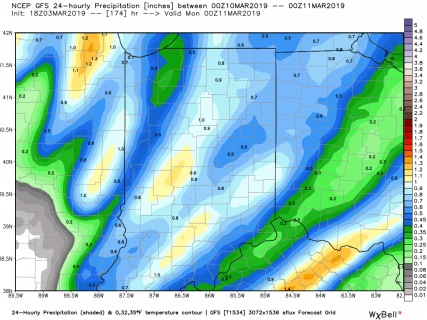 Cold air is the main topic of discussion this week, but also of note will be the fact that we really only have one significant precipitation outbreak to worry about for the next 10 days. Once we get into the extended 11-16 day period, we have a much more active pattern developing.

The first half of this week will be bitterly cold. Strong north winds bring in arctic air again. Highs today and tomorrow do no better than the teens and low 20s, although tomorrow we probably see more of the state in the 20s than today. We stay below normal on temps through Wednesday. Strong north and northwest winds tomorrow bring a chance of lake effect snow to northern parts of the state. Generally, though, the rest of us will see clouds and sun in various ratios through the period. Thursday features cloudy to partly sunny skies, but scattered snow showers are back, this time with about 40% coverage statewide. We think that a coating to an inch or less will be the best possible accumulation but are emphasizing the “or less” part of that statement. There just is not much moisture to work with here. Thursday will be the first day we start to see some temperature moderation meaning we should be less cold…although likely not close to normal yet. Friday will feature partly to mostly sunny skies, and finally a push to normal and event slightly above normal temps.

Wind really pick up for Saturday. We have plenty of sun to start but will see clouds build ahead of our next system’s arrival. Expect south winds at 20-40 mph through the day Saturday. Rain and thunderstorms develop Saturday night and that continues through Sunday mid to late morning. We expect 100% coverage of rains from half to 1.5” Some of the rain can be heavy, although we think that it will take a line of thunderstorms to put you into the upper half of the range. The map at right shows 24 hour rain totals between Saturday night and Sunday night. We should see some clearing by late Sunday afternoon.

Monday and Tuesday of next week will be cooler than the weekend, but still should be able to be termed “seasonal”. We expect partly to mostly sunny skies for those days. Clouds start to increase overnight Tuesday night into Wednesday.

Kicking off the extended 11-16 day forecast period Wednesday afternoon, we have rain arriving and continuing through Thursday. Rain totals will end up at .25”-.75” over 90% of the state. These rains are relatively gentle, but just last a little longer than some of our recent systems. WE follow up the system with a colder day for next Friday, and some lake snow potential up in the far northern part of the state. We should see a mix of clouds and sun elsewhere. Another significant warm up kicks off for Saturday the 16th, and with strong south winds, we expect another strong storm to come through shortly thereafter. Rains start Saturday night and precipitation goes through Sunday. AT this point we will leave open the potential for a changeover to snow in this storm. Some models say yes, but trend shows that the cold air over the past few events has waited for the strongest part of the system to pass before moving in. Either way, we are projecting liquid equivalent precipitation at anywhere from .3”-1.1” and coverage at 90%. It turns significantly colder again behind that system for the Monday and Tuesday, the 18th and 19th. In that cold airmass, we can’t rule out a little bit of flurry activity.