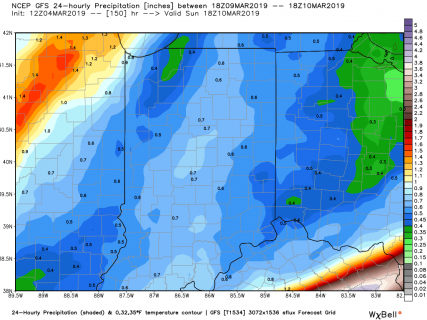 Cold air is once again in command of most of the state today, but we do put a few more degrees on our temps today vs. yesterday. A few spats of snow blew up off the lake yesterday and last night, and today we have better chances of that over north central and northeast Indiana, with strong NW winds still crossing the lake. There is no precipitation threat across the rest of the state. We remain partly sunny tomorrow, before clouds increase on Thursday. The precipitation threat for Thursday is shifting farther south and is delaying just a little bit. Right now, we will keep the chance for scattered snow showers in over an area from I-70 south late Thursday afternoon and Thursday evening. The totals do not look all that impressive and will be limited to mostly a fresh coating or maybe half an inch in one or two spots. Otherwise, its nothing. Coverage looks to be no more than 40%

Friday turns out partly sunny, but we can’t rule out a few flurries her and there, then on Saturday clouds will really increase. We also see a significant escalation in winds for Saturday, coming from the south and building to 20-40 mph by early afternoon. This will bring in significant warming and take temps above normal. WE are bringing the rain a little sooner, arriving Saturday afternoon and then continuing overnight Saturday night through Sunday mid to late morning. Rain totals are the same as our forecast 24 hours ago, at .5”-1.5” and coverage at 100%. There will be good thunderstorm potential overnight Saturday night into early Sunday, and we still think that it will take at least one or two of those thunderstorms to get any given area into the upper half of the rain range. The map shows storm total precipitation potential. Winds stay up for Sunday afternoon but switch to the west (eventually NW) while skies begin to clear. Monday looks partly sunny but colder.

We are speeding up the arrival of our next system, with clouds building Tuesday morning. Rain arrives Tuesday afternoon and continues through Wednesday. Even though we see the rains stretched out over a longer period, we likely do not see much of an increase in moisture totals, with our projections at .25”-1”. That is a small increase on the top end, but we are leaving the bottom end of the range alone this morning. We turn colder with partly sunny skies next Thursday to finish out the 10 day window, although some models are trying to keep with a later arrival of the system and therefore a slower exit. We will watch the developments closely.

For the extended period, we still look pretty active. Next Friday should feature mixed clouds and sun, then a strong system is still on the way for the following weekend. Models seem to want to buy into a colder bias, and hence more snow. However, we are reluctant to take sides just yet. We are going to keep all precipitation types in the forecast at this point, led by our bias toward, rain, but then also leave the door open to snow, thunderstorms and perhaps some freezing rain. Liquid equivalent precipitation can be anywhere from .3”-1.1” and coverage at 90%. It turns significantly colder again behind that system as we clear out for Sunday. On Monday the 18th we can see a bit of snow potential down south, near the OH River, but should be dry and cold for Tuesday and Wednesday, the 19th and 20th.