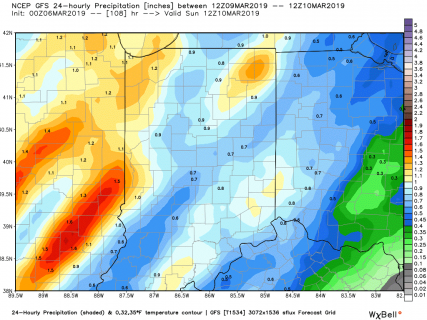 Partly sunny skies will be in over most of the state today, but we still can’t shake the cold over the region. Temps will again be a couple of degrees warmer than yesterday, but by no means are we approaching normal or any above normal temps. The threat of lake effect flurries is minor today. Tomorrow clouds increase, but we still see no significant precipitation threat over the northern half of the state. From I-70 south, we can see some scattered late afternoon and night time snow showers, bringing the potential for a coating to an inch of the white stuff.

Friday turns out partly sunny from mid-morning on, and we should start to see temps turn milder. That milder push will come ahead of our next significant weather event. Clouds increase through the day Saturday, and then rain develops from late Saturday afternoon and continues through sunrise Sunday. We are pulling our rain totals back just a bit, but are still looking at some good moisture potential. Right now we expect .4”-1.2” over 100% of the state. The map at right shows precipitation potential for the event. The rest of Sunday turns out partly sunny as clearing settles in, but the winds really ramp up on the backside of the event. West winds will blow at 15-30 mph, after a strong south wind Saturday. Monday and Tuesday are partly sunny and chilly.

Our next system is still on track for midweek. Clouds spread in overnight Tuesday night and rain is happening already Wednesday morning in northern Indiana. This is a minor wave to start the event, then better rains and even thunderstorms come from Wednesday evening through early Thursday. Rain totals from the two waves combined will be from .5”-1.25” with coverage at 90%. The rest of Thursday will feature a mix of clouds and sun. Friday can be partly sunny, but flurries can remain with minor coverage.  Even though we see the rains stretched out over a longer period, we likely do not see much of an increase in moisture totals, with our projections at .25”-1”. That is a small increase on the top end, but we are leaving the bottom end of the range alone this morning. We turn colder with partly sunny skies next Thursday to finish out the 10 day window, although some models are trying to keep with a later arrival of the system and therefore a slower exit. We will watch the developments closely.

For the extended period, is trending less active this morning. The weekend features plenty of clouds, but so far nothing more than flurries. Monday and Tuesday, the 18th and 19th should bring partly sunny skies, but another cool push, and then we have some rain coming into the state next Wednesday, the 20th, but it stays over the southern third, mostly from US 50 south. We look to finish out the extended period with partly sunny skies and a cold afternoon for Thursday the 21st.