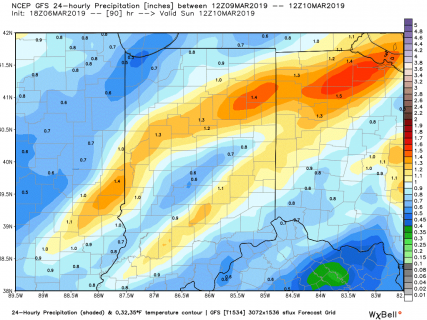 A mix of clouds and sun expected over the state today, as some minor precipitation remains on track to move in later this afternoon and tonight That moisture is coming out of the plains and western corn belt and should move into Indiana in the form of snow. Right now, we still expect the best precipitation potential to be in central and southern Indiana, where we can pick up a coating to an inch (or two), but generally this thing looks pretty minor. Northern areas won’t be able to rule out flurries but should escape with little to no significant action. Temps today are a bit warmer than yesterday but still well below normal.

Tomorrow turns out partly sunny in the north, and clouds give way to sun in the south. Temps will be moderating. The milder push will come ahead of our next significant weather event. Clouds increase Saturday morning, and rain moves into far SW Indiana by noon to early afternoon. From there, rain spreads across the rest of the state through the afternoon and continues to just past midnight. We think that all rains now are done by sunrise Sunday. We are keeping rain totals this morning at .4”-1.3” over 100% of the state. The map shows precipitation potential for the event. Sunday turns out partly sunny as clearing settles in, but the winds really ramp up on the backside of the event. West winds will blow at 15-30 mph, after a strong south wind Saturday. Monday and Tuesday are partly sunny and chilly.

Our next system is still on track for midweek. Models have some significant divergence in thought on this system, with the European model suddenly going much, much drier, while other models continue with the potential for some moderate to heavy rains. At this time, we see no reason to change our forecast based on just one model and one model run, but we will continue to monitor. For now, we look for rain through most of Wednesday bringing at least .25”-1” with coverage at 90%. We do think that most precipitation will be done by early Thursday morning here, while lingering farther east. That means we see Thursday turn out partly sunny and look for a mix of clouds and sun for Friday took with a cooler afternoon.

For the extended period continues to look cold, with well below normal temperatures. On Sunday, we can see some light snow and flurry action over the southern half of the state with minor accumulation potential and coverage at 60%, but the northern half of the state stays partly sunny. We do not see any well-organized frontal structures coming toward the region for the remainder of the period, but with strong NW winds, we think that we end up with plenty of lake enhanced clouds over the area, and we can’t rule out flurries from Monday 23rd through Friday the 27th.