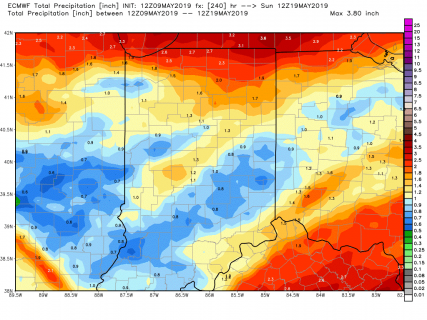 No change in the nearby forecast this morning. A cold front moved through the state late yesterday and overnight, bringing much cooler air to the region. Temps today will be a good 15-20 degrees cooler than yesterday and should be below normal for this time of year. We will be rain free and should see good sunshine

Sun may start the day tomorrow, but clouds quickly build as our next round of moisture moves in. Showers develop by early afternoon and then spread across the state through the rest of the day and overnight, ending Sunday morning. rain totals can be from .25”-.75” with coverage at 90% of the state. The heavy thunderstorms will stay just south of the Ohio River, which is why we have trimmed the top end of the rain range just a bit.

Sunday afternoon we will still see some lingering clouds but should not have to deal with much in the way of new precipitation. That being said, we can’t rule out some isolated pop up showers with perhaps 30% coverage. We remain cloudy to partly sunny on Monday and also may have to deal with a pop up shower in one or two spots. The clouds and the nearby moisture means we do not see as good of drying for these periods as we had hoped, in spite of no new significant precipitation. Tuesday should turn out partly to mostly sunny.

Rain arrives for next Wednesday with 90% coverage once again. Rain totals will end up from .1”-.7”. Most of this action will be gentle, but there will plenty of moisture around.

We can talk about a 4 day dry stretch to finish next week, though. We turnout partly to mostly sunny next Thursday through next Saturday. Temps will be cool to start, but will build back to near normal levels by the end of the dry stretch. Will it be enough to promote field work? That depends mostly on what we see out of the systems ahead of it this coming Saturday night and next Wednesday. The map shows rain fall potential cumulative through the next 10 days.

The extended period still has rain in for the 20th and 21st, as we start things off. We like rain totals for those days combined at .2”-.8” with coverage at 70% on Monday (20th) and only 30% on Tuesday (21st). The rest of the period we still are leaning toward a drier solution, but models are being consistent and persistent in talks of moisture for the Wednesday-Friday period (22nd-24th). We will wait on data from through the weekend before changing our forecast, so stay tuned.