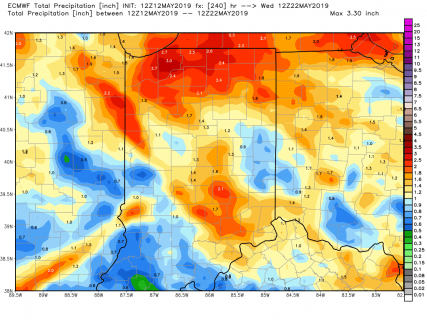 The weather pattern remains unfavorable for large scale drying over the next 10 days. We have trouble putting together more than a day or two of true dryness with good evaporation in a row. There will be some areas that miss out on rain here and there, and may be able to have a better shot at field work than others, but on the whole, Indiana still has a less than optimal weather outlook going forward through the next 10 days. SW parts of the state may end up being in the best shape for additional fieldwork through the period.

Today, we see another mostly cloudy, cool day over most of the state. Scattered showers will be around this morning and midday in northern parts of the state with 60% coverage. Rain totals in those areas will end up being from a few hundredths to .25” …which is not a lot, but it does mean we just do not dry down very much today. Another round of cold air races in tonight, and we have a threat of frost in northern areas overnight. Tomorrow may end up being the best day of the week, as we turn out partly to mostly sunny and see temps rebound. Evaporation will be near a maximum level tomorrow.

Clouds return Wednesday, perhaps not right away in the morning, but soon thereafter. Scattered light showers spread across the state with 60% coverage and producing a few hundredth to .25”. Everything should be done before midnight Wednesday night. Thursday turns out partly to mostly sunny from US 24 southward, with another good evaporation day. North of US 24 we don’t see any new precipitation during the daytime hours, but sun will give way to clouds as the day progresses.

Rain and thunderstorms race into the state Thursday night and Friday. Thursday evening through Friday midday, the rain and thunderstorms will move through areas from I-70 north with 90% coverage. Rains there can be from .25”-1”. From Friday morning through Friday evening, showers slowly drift across areas of the state from I-70 southward, but will less moisture and lower coverage. There we expect a few hundredths to half an inch tops, but coverage only at 50%.

Saturday brigs a mix of clouds and sun, but we can’t rule out a shower or two over 25% of the state with amounts up to .25”. Sunday starts with sunshine, but clouds return quickly, bringing showers and thunderstorms from late Sunday afternoon through the overnight. Moisture totals have a wide range here, from only a tenth all the way up to 1 inch, with what any area gets being heavily dependent on what thunderstorm activity does. Rain coverage will end up being around 60% for that period.

An “on-again-off-again” moisture pattern develops for early next week. Scattered showers are possible each day Monday-Tuesday-Wednesday, with 50-60% coverage each day. Combined coverage will end up around 90% for the 3 days together, and combined rains will be from .1”-.75”.  While there will be holes in precipitation, it will be difficult to get well spread drying for that period. The map shows rain fall potential combined over the next 10 days.

For our extended forecast, we start with a dry day for Thursday the 23rd, featuring partly sunny skies. Rain returns next Friday, but only in southern Indiana, where we can see up to .8” form US 50 south. There should be nothing going in over the northern half of the state, while areas from I-70 to US 50 can to either way at this time. Three (3!) dry days are possible from the 25th through the 27th with partly to mostly sunny skies. We finish the extended window with a chance of showers in the northern third of the state for the 28th.