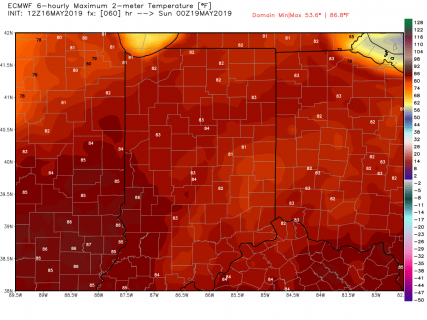 Rain arrived a little earlier and moved a little farther south than we were originally looking for yesterday and last night, but overall, moisture totals and coverage held up out of the event. Today, we likely see some lingering clouds over the state, and we can’t rule out a shower or two, mostly up north, but coverage of action today will be limited to 30%. Additional rains will be generally under .25” We turn fully dry tonight and stay dry through tomorrow and Sunday morning. Temps really climb this weekend. With strong south winds, we will see temps in the 80s statewide, and perhaps the warmest temperatures in 8 months. The map shows highs on Saturday.

Scattered showers arrive a little faster in Indiana on Sunday showing up early afternoon then continuing through the evening and overnight. We are leaving rain totals alone this morning with most of the state that receives rain seeing a few hundredths to .3” (coverage 70%). However, we are getting some indications that perhaps another 10% of the state may see some slightly better chances for thunderstorms, and rain totals closer to half an inch (or slightly higher). Most of these areas are in the southern half of the state.

A large part of our forecast for next week remains dry. Sunshine dominates for Monday and Tuesday morning. Sunshine also dominates from Wednesday afternoon through next Sunday. That leaves our “thorn in the side” of Tuesday afternoon and Wednesday morning. Models will not remove moisture yet, but totals look to be much smaller here than what we see off to the west. Given how the thunderstorm action worked in yesterday afternoon, we think that we have to leave the door open for scattered showers and perhaps a rumble of thunder for that Tuesday afternoon/Tuesday night period. We are keeping rain potential right now at .5” or less, and coverage at 60% or less. WE still think there is a good chance that the moisture stays west in IL, but models are not coming around to that though process yet, so since we are at a critical juncture on planting…we need to be up front about the threat so we can plan. There still looks to be a good window behind that threat through the rest of the week over a majority of the state.

The rest of the extended period features no change in our thoughts. We remain on track to see a little more activity returning as we finish the Memorial Day holiday weekend. For Memorial Day, we turn out cloudy to partly sunny with a few scattered showers and thunderstorms moving in. We are raising rain totals for Memorial Day to .25”-.75” with 60% coverage. Tuesday the 28 still looks like the wettest day of the period as we are upping our rain potential there to half to 2 inches and coverage at 80%. The rest of the extended period we are keeping dry with partly to mostly sunny skies the 29th through the 31st.