Rain is moving off to the east this morning, working through Ohio. We should see some sunshine through the day today, but clouds also linger in spots. Temps should be slightly cooler and winds a little less active than yesterday.

Going forward, the pattern looks to feature a lot of hit and miss moisture. This kind of set up lends itself to spotty coverage of rain, but from tomorrow through next Wednesday, a large part of the state will see some rain. The big rain event of the next 10 days will be next Thursday and Friday.

We start off this “unsettled” pattern with an upper level disturbance moving across the Upper Midwest and into the Great Lakes tomorrow. This will bring rain in to the state from I-70 northward. WE look for a few hundredths to at most .3” with coverage at 70%. The best coverage will fall the farther north you go, particularly near the Michigan line. South of I-70 we see nothing. Scattered showers linger for Saturday from US 30 northward. That round of moisture amounts to only a few hundredths to a tenth or two. Clouds mix with sun down to SR 26, and then south of there we see mostly sunny skies for Saturday. 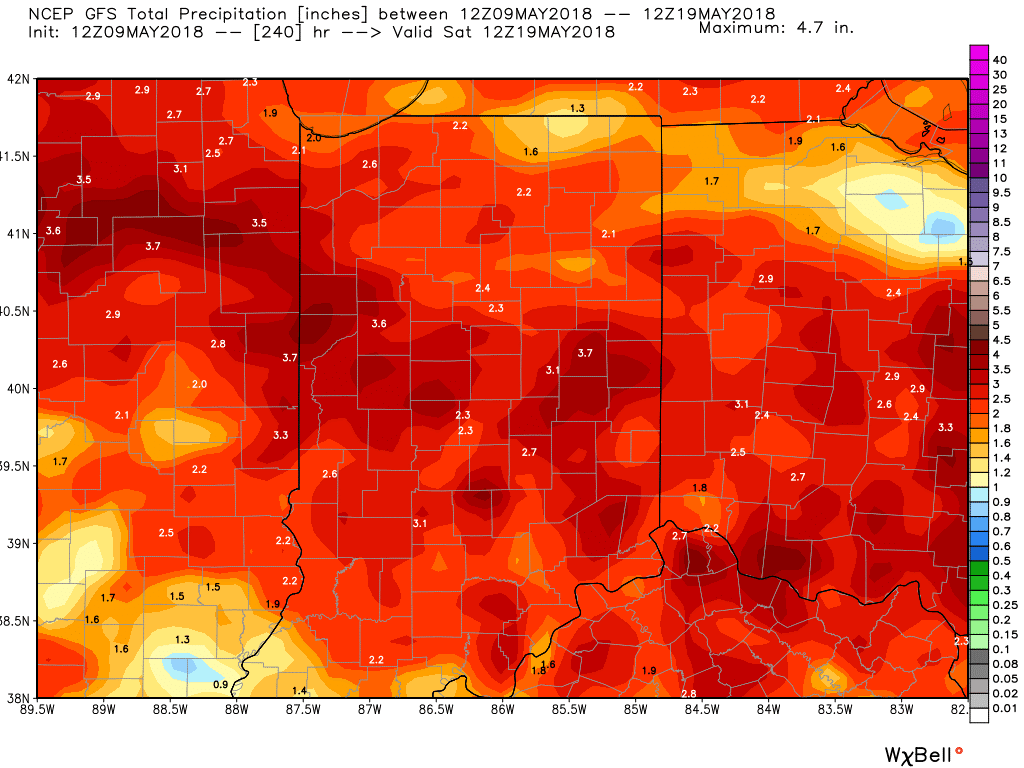 A frontal complex sags through the state on Sunday. This front looks substantially less impressive now than it did several days ago. WE are going to keep rain in the forecast, kicking off Sunday afternoon. Most of the rains for Sunday on into the overnight will produce a few hundredths to .4” with 40-50% coverage. Stronger thunderstorms may try and fire off early Monday morning in west central Indiana, and scattered showers continue south of I-70 through the day Monday. Monday will be dry up north.

We should be partly sunny Tuesday morning, but shower and thunderstorms redevelop later Tuesday afternoon and overnight. That round of moisture can bring .05”-.5” with 40% statewide coverage.

A powerful circulation moves in for next Thursday with half to 2” rains likely, including some stronger thunderstorms. Coverage will be 90% of the state. Additional rains hit 40% of the state on Friday bringing .25”-.5”. The map above shows 10 day rain totals for Indiana from the GFS model…these are over done…we think we get about 75% of these totals over the coming period. But, still, you see that the entire state is going to get field work delay inducing rains between now and the end of next week.

We should be dry for next weekend, but then in the extended period, we are watching a front sliding in from the NW around the 21st. We are leaving rain totals alone with this front, looking for .25”-1” and 80% coverage. The rest of the extended period looks interesting, as one model tries to bring the remains of a tropical disturbance right up into the Indiana area for the 23rd and 24th. While we won’t completely rule that out, we have problems with that solution because 1) the model that is really ramping this up is one that is notoriously awful at projecting early season tropical storms in advance, and 2) any storm that makes it all the way north like this is shown would have to be rather large and strong…not a feature one would expect with any May tropical disturbance. So, while we are not jumping on this at the moment, we will watch it. In fact, if a front does come through on the 21st, any tropical storm that would try and move north would likely end up using that front as a corridor to move along…and it should be well out of our area by the 23rd. We’ll see.

While the moisture is hit and miss over the next couple of weeks, temps still look to be mostly normal to above normal over Indiana and the eastern corn belt in general.