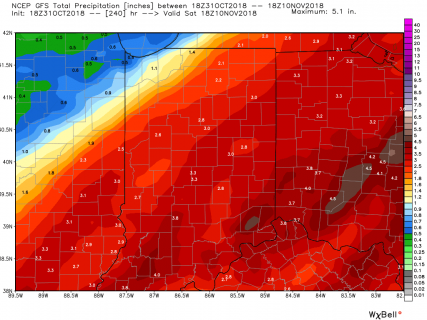 Rain continues over the state today, and as low pressure moves up the front out of the mid-Mississippi valley, we will see moisture work northward. That means today will feature the heaviest and longest lasting rains in the southern half of the state, but the north will not be completely immune, with rain pushing in this afternoon. We are putting rain totals today at .1”-.5” over the northern third of the state, and .5”-2” over the southern two thirds of the state. There can be some areas that end up with more than two, if the variable all line up just right.

The significant rains are off to the east and south tomorrow. However, we expect a pretty good batch of wrap around moisture with this circulation. Most of that will manifest as clouds, but we won’t rule out a spit or sprinkle over the state. Coverage will be pretty minor, but enough that we can’t wave the all clear flag just yet.

This weekend goes dry!! Well, at least Saturday through Sunday morning. We should see good south winds over the weekend, taking temps well above normal in all areas. Clouds will start to increase Sunday by midday, and later in the afternoon we see a minor trough working through. That will trigger light rains, a few hundredths to no more than .3” but we are increasing coverage to near 80% and it won’t take much to nudge that closer to 100%…but time will tell.

We don’t see much of anything through the day Monday, but Monday night through Tuesday a strong system and cold front sweep through. Rain totals will be from .5”-1.5” with coverage at 100% of the state. This will be another good, soaking rain in all areas, and will add to harvest delays.

A little good news as we end the 10-day window: we are dry from next Wednesday all the way through Saturday and even next Sunday should say precipitation free, although we expect clouds to develop there. Temps will be cooler than the first part of next week, as there is strong north winds and a Canadian high-pressure dome that will move in behind the big rains Tuesday. Still, though, we expect good evaporation rates and stronger west and northwest winds to aid in drying.

For the extended period, we have rain coming back for the 12th, bringing .25”-1” over 75% of the state. Then we are dry again for Tuesday the 13th through that following Friday.

So, drier windows do exist in our forecast, but it takes til the second half of next week to get to them…and there is a lot of moisture headed toward us between now and then. The map shows rain totals now through next Wednesday morning.