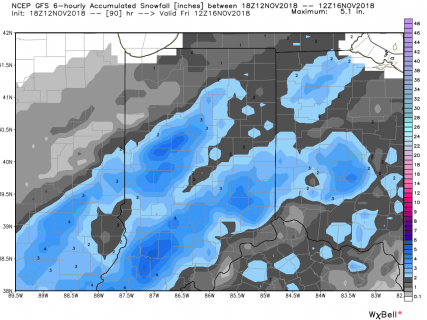 Light snow will be moving away this morning, but we are increasing our snow potential for later this week. Overnight we saw snow fall, and as it moves away today, by midday we should see amounts ultimately totaling a coating to an inch. That is it. In fact, the best precipitation is already behind us this morning. We can see clouds break for some sun later this afternoon, although temps remain chilly. We stay dry tomorrow as well and see some decent sun before clouds start to build again.

On Thursday, we are going to have to ramp up our precipitation forecast and coverage area. We had been hoping to see the low-pressure center stay south, and keep heavier precipitation at bay. Well, we are looking for liquid equivalent precipitation totals to be about the same as our forecast 24 hours ago, but the coverage is expanding greatly, and a second wave out of this system will drag some of those heavier moisture totals farther north. Snow starts south of US 50 already Thursday morning, and by early afternoon will have spread to nearly 90% of the state. Snow will continue through the evening and overnight and should be done by Friday morning. Liquid equivalent precipitation totals will be from a few hundredths to .6”, with the heaviest near the river. However, some of the better snows can also be in central to northern Indiana, from the I-70 corridor up to Kokomo. Right now, we will project a coating to 3 inches as a general snow blanket over 70% of the state. The map at right shows potential snowfall for the Thursday-Friday period. We think the 4 inch totals are a little overzealous, particularly in southern Indiana…but all it takes is a small shift south in cold air, and it becomes a reality very quickly.

We should be dry in all areas Friday. On Saturday, we are still watching a little clipper system trying to race across the corn belt near the I-80 corridor, but we are not as concerned about significant precipitation out of it. We won’t rule out a few flurries Saturday morning and midday over the northern third of the state, but think precipitation is less likely. We still think areas from US 24 southward see nothing. Partly to mostly sunny skies emerge for Sunday, but we do have the potential for some lake effect snow in NW Indiana, from Hammond across to Michigan City, and then south through Newton, Jasper, Stark and Pulaski counties.

We are dry Monday through Thursday of next week. Clouds may begin to increase for Thanksgiving afternoon, but we are not completely sold on any precipitation threats. We are watching thanksgiving night closely. Friday still looks mostly dry.

Rains are in for the 24th through the 26th. And yes, we are talking rain. Temps will climb the second half of the week next week and will easily be warm enough for rain. Totals can be half to 2”, which will be way more than we need in any area. However, be thankful that we are talking rain, with that kind of available moisture around!!! We turn dry and colder again behind that 3-day system for the 27th and 28th.

In the extended period, we are going a little drier now. Thanksgiving should be dry, but we see 1 system for the 11-16 day window, moving through for the 24th and 25th. Rain totals can be from half to 1” and yes, we are talking rain at this time. WE see good south winds developing next Wednesday into Thursday right at the end of the 10-day period. This will bring a warmer flow pattern in and allow us to see temps about 5-7 degrees above normal. That promoted the late November rain.