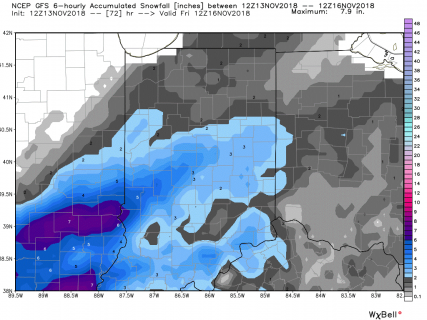 Dry and at least partly sunny through most of the day today as we are in-between systems. However, clouds will start to build later this afternoon, particularly in southern Indiana ahead of our approaching moisture surge from the south. It should be a nice day today in many areas, but still chilly.

Moisture is coming about 6 hours faster with our next event. By this evening, moisture will be pushing into southern Indiana and will be up to near US 50 by midnight tonight. From there, moisture spreads across the rest of the state through the overnight and through Thursday. We are keeping liquid equivalent precipitation totals the same at a few hundredths to .6”, with coverage at 90% of the state. Snow totals will be from a coating to 3” with coverage at 75% of the state. We need to watch areas near the river for some rain mixing in at times tomorrow that may cut snow accumulations, but by the same token, we need to watch some areas in SW Indiana up into central Indiana, particularly from Vincennes up through Rockville over toward Lebanon and then northeast…there is some concern over slightly higher snow totals there. It all comes down to temperatures tomorrow, and right now, we think temps here are going to stay closer to freezing for a longer period of time. All precipitation should be done by shortly after midnight tomorrow night. The map at right shows potential snow through midnight Friday.

We should be dry in all areas Friday through next Wednesday. This is a drier forecast, as we are taking precipitation out on Saturday. There can be some clouds around, but the disturbance is losing moisture quickly, and will have nothing left as it drifts across the state. The weekend should be decent. Even winds do not look as strong Sunday, so concern about a bit of lake snow in NW Indiana is easing.

While we are taking moisture out for the weekend and giving a longer dry window in this forecast this morning, we are going to have to pay for it. That comes next Thursday, on thanksgiving. We are projecting clouds to increase through the midday and early afternoon, and we can’t rule out a bit of moisture, light rain and light snow, from late afternoon through the evening. Rain continues through Black Friday. Totals do not look too dramatic, but still, we will be calling for a few hundredths to .3” with 75% coverage.

The extended 11-16 day period starts drier, and we are taking rain out of the forecast for the 24th. However, we are leaving a good slug of moisture in or the 25th and 26th. To be clear, we are still taking about all rain, as temps begin to climb after thanksgiving.  Since we are lopping the 24th off of this precipitation event, we are drawing the top end of the rain projection back slightly and are looking for half to 1.5” rain totals, with coverage at 90%. A second minor batch of moisture arrives a few days later around the 28th and 29th but should produce under .25” of moisture. We cool down with that system and may have to look at a rain/snow mix.