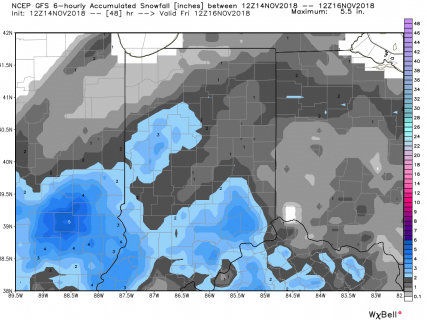 A large part of the state sees snow or at least a rain-snow mix today. There will be a pretty good dry slot working into the state this afternoon and should allow action to taper off, but we won’t truly see all precipitation done here until closer to midnight. We are still looking for event total precipitation amounts to be a coating to 3” of snow and a liquid equivalent of a few hundredths to .6”. Moisture falls over about 90% of the state, but the accumulating snow will be over 60% of the state. Southern Indiana sees temps warm some today, which will allow for better rain chances to mix in. Still, the best descriptor of this set up will be a “wintry mix” pretty much all day, when you look at the state in its entirety. The map above shows snow potential for the entire event (going back into last night).

We should be dry in all areas tomorrow to finish the week, and we should see a mix of clouds and sun. We are bringing in more clouds for the weekend, as a weak clipper like disturbance still wants to move out of the northern plains tomorrow and move across the upper Midwest and into the Great Lakes. The system is dying as it arrives, and that is the reason we really are looking at only clouds from it here, while it does put down some minor snows farther west in northern IA and southern MN tomorrow. But, the air behind this little system is significantly colder. So, colder air, with plenty of clouds…it would not take much to wring out a flurry or two. We are going to take another look at the weekend again tomorrow morning and finalize the forecast, but for now, even though we are still saying mostly dry, we will grant that it will not be as nice Saturday and Sunday as tomorrow over the state.

We get better sunshine and more dry weather for Monday through Thursday. That is an extension of 1 day over our previous forecast, as we think we can squeeze out a pretty nice weather day for Thanksgiving Day. Clouds may be on the increase late in the afternoon, but we are pushing all precipitation back into Friday. Rains start in the morning and continue all day Friday, bringing a few hundredths to half an inch.

The extended forecast is a little drier this morning, with less moisture developing for the 25th and 26th. We won’t completely remove a chance of rain in that time frame, but we are seeing a better focus on moisture development with the second chance we were looking at around the 28th and 29th. In fact, some models are suggesting heavy rains pushing into the 30th as well. However, those solutions also are predicated on some form of tropical involvement, with moisture coming out of the western gulf near the TX gulf coast late in the month and lifting up across the Mississippi Valley into our neck of the woods. We think that is rather overdone, and as such, we are going to keep a much more conservative forecast for the period with only light rains for the 28th and 29th. We are looking for a few hundredths to .25” there. Divergent models and data this morning mean we are going to leave our forecast alone for the most part and let some of the uncertainty settle out.