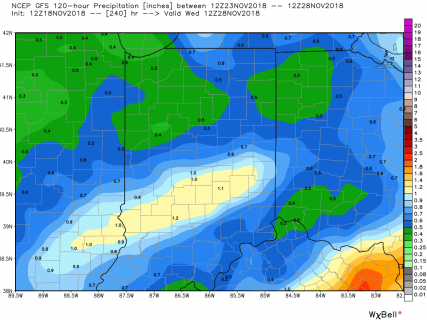 Some good news and some bad news this morning. The good news is that we will not see significant new precipitation through this entire week, as we are pushing back moisture into Friday night and most of Saturday. The bad news is that we are not going to be able to go bright and sunny right away this week. Moisture did not die off yesterday, and instead brought minor precipitation to a large part of the state. As such, we are going to have to work our way out of cloud cover over the next day or two, before we can really get to fully sunny and nice weather.

So, we start it all off today with light moisture exiting south and southeast parts of the state. There can be additional precipitation to the tune of a few hundredths to a tenth or two this morning into midday before everything is done. Farther north, in central and northern Indiana, look for clouds to mix with sun. Temps will be heavily dependent on sun. Morning lows are widely varied this morning as some areas cleared out overnight, and others did not. Clouds are likely more of an issue today than tomorrow, as we should start toe see better sunshine emerge as we go forward. WE do not expect any new precipitation today outside of the moisture that is leaving southern Indiana. Tomorrow there can be some lake effect cloud cover in northern Indiana, but generally we expect a little more sun than today.

Mostly sunny and dry for Wednesday and Thursday (Thanksgiving Day). Temps will move slightly higher on Wednesday but should start to move up faster on Thanksgiving. We keep dry weather around for Black Friday too, but clouds will be on the increase there. We have not major travel problems expected for Thanksgiving due to weather.

Rain arrives overnight Friday night and continues through Saturday. Rain totals will run from .05”-.5” with coverage at 100% of the state. Rains of .25”-.5” will mostly be from I-70 southward, while northern Indiana will be more from a few hundredths to .3” All action is done by sunset Saturday night. We will be dry Sunday.

Rain is back by Monday midday and precipitation holds on all the way through the end of next Tuesday. Rains to start Monday afternoon, Monday night and early Tuesday will bring up to .6” of liquid to 90% of the state. Then, as cold air barrels in through the balance of Tuesday, rain changes to snow, especially in northern Indiana, where we can see a coating to an inch or two out of another .25” of moisture at least. All told, for the entire event, we expect liquid equivalent precipitation to range from .2”-.9” with coverage at 100% of the state. This system will also bring a significant colder push, taking temps back to below normal levels statewide. Light snow can continue off and on through next Wednesday morning from US 24 northward. The map above shows potential combined precipitation (liquid equivalent) for the next 10 days, with the largest part of this coming Friday night in to Saturday and then the first half or next week.

The extended forecast period is tough to get a handle on this morning. The cold air pattern that emerges after the system early next week would be supportive of more “clipper-like” systems. The track of these favors the upper Midwest and Great Lakes, rather than the full ECB including all of Indiana. However, models are not in much agreement either. For now, we are going to allow for moisture off and on in northern Indiana next Wednesday the 28th, as mentioned above, but are taking moisture out for the 29th. A chance of snow moves over northern and eastern Indiana on Saturday December 1st but is not well organized. Right now, the pattern looks to dry to us, so we expect some strengthening of that system to start December, and it may turn into a bigger even for the 2nd and 3rd. For now, though we are just going to watch it. Temps through the 11-16 day period will be below normal.