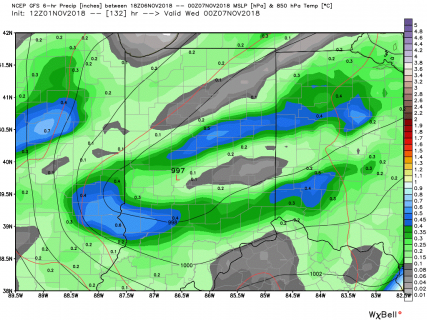 We have no major changes to our forecast this morning. The heaviest rains are off to the east and north of us. However, we continue to see some pretty good wrap around moisture. Most of this will manifest as cloud cover through the day today, but this morning into midday, we won’t rule out a few scattered showers, particularly in eastern and northeastern parts of the state. In general, clouds will be the dominant player in your Friday

We should stay dry through at least tomorrow, and probably half of Sunday. Tomorrow will have a very chilly start, with some frost over parts of the state, but strong south winds develop through Saturday midday and afternoon, taking temps above normal in all areas. Clouds will start to increase sooner on Sunday, with some areas having plenty of clouds already Sunday morning. However, well organized precipitation still holds off until later in the afternoon and early evening, and then goes through the overnight period. We look for light rains, a few hundredths to no more than .3” with coverage to near 90%.

We don’t see much of anything through the day Monday, but Monday night through Tuesday a strong system and cold front sweep through. Rain totals will be from .5”-1.5” with coverage at 100% of the state. This will be another good, soaking rain in all areas, and will add to harvest delays. The map above shows a snapshot of Tuesday evening.

Dry weather settles in from next Wednesday into the weekend. Clouds will be slow to break up on Wednesday, but we should see good sunshine Thursday forward. High pressure coming in from the NW will aid drying along with west and NW winds. Temps will be cooler.

For the extended period, we have rain coming back for the 12th, bringing .25”-1” over 75% of the state. However, there is some disagreement among various models about Sunday, the 11th. Some are trying to bring some early moisture in for that day, others keep all action on the 12th. We are going to leave our forecast for precipitation only on the 12th fully alone this morning, and then will revisit the issue next week. Whether rain starts the 11th or 12th, we still look for another dry window to return Tuesday the 13th and hold through that following Friday.