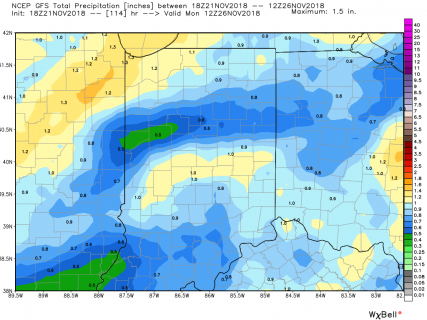 We should squeeze out another dry day over most of the state today. However, our pattern goes back to moist quickly. Clouds begin to build over southwest Indiana later this afternoon, and rain arrives late tonight. Rains continue through the overnight and tomorrow. We are keeping rain totals at .25”-.75” with coverage at 100% of the state. Rain will be done by Saturday evening. Another batch of moisture arrives Sunday afternoon and evening into Monday. This brings another .2”-.6” to 80% of the state. The map above shows potential totals from both systems combined, through Monday morning.

Light snow can develop on the back side of that wave for Monday and Tuesday, mostly in northern Indiana. Flurries are the most likely type of snow, and we do not expect accumulation. The best snow chances remain north of US 24.

Mixed clouds and sun will be here Wednesday, and then we have a minor clipper system that brings some snow potential to the state again next Thursday. That system brings minor snows, perhaps a coating to an inch or two over the state with 60% coverage. This snow centers mostly over central and northern Indiana, but we won’t rule out flurries south either. We finish the week next week a dry day next Friday.

As we flip the calendar into December, the pattern still looks to become a lot more active. Two systems move through in a five day stretch from the 1st through the 5th. The first wave, coming from the 1st through the 3rd will bring the potential for half to 1.5” moisture totals. The second can bring up to an inch. There is still a lot of disagreement on temps. Some models are saying mostly rain, others are saying ALL SNOW! We want to see how things look through the first part of next week before we really zero in on that debate. Still, that means we have plenty of moisture (in fact, way too much moisture) to start off next month, and any remaining acres to be harvested will have that much more difficulty.

Temps stay above normal through this weekend, but our system on Sunday brings colder air in for next week. We expect to be seeing normal to below normal temps all next week, and if another leg down on temps happens ahead of those December systems…they will trend more toward snow.