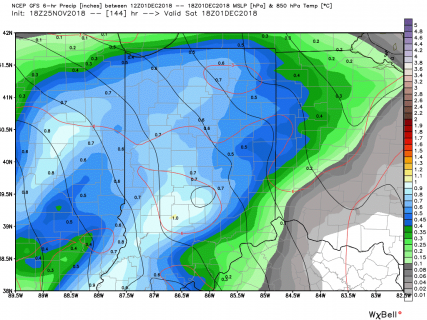 A winter storm system is moving across the state today. The good news is that it really is only affecting about a 25%-30% of the state. But the bad news is that in those areas, it’s a bit of a mess this morning. Now, it could be worse. Northern IL has been and is getting hammered. Same for lower Michigan. The low-pressure center of this storm is tracking from the Champaign, IL area last night around midnight to between Toledo and Defiance, OH this morning, to south of Kitchner, Ontario by mid to late afternoon. That track keeps most of the state out of the worst snow potential Liquid equivalent from the event remains nearly the same as we projected last week, at .2”-.7”. I-70 southward today sees little action, perhaps a sprinkle or flurry. Draw a line from just south of Kentland, IN up to just south of Angola. From that line south to I-70, we can see some snow, perhaps a coating to an inch would be the max.

From that line north to US 6, we can see 1-3 inches. From US 6 to US 20, we can see 2-5 inches. North of US 20 we can see some totals over 5 inches, but it is dependent on lake interaction. Michigan gets the higher totals, so as you get closer to the Michigan line, you will see your potential climb. This is a storm that is very heavily dependent on track and distance. For example, yesterday back in western IL, only 50 miles separated a tornado warning area from a blizzard warning area! Precipitation is done by evening tonight. However, we can’t rule out some lake effect snows in northern Indiana overnight tonight through tomorrow. Accumulations will be limited to normal Lake effect snow areas (Porter, Laporte, St. Joe, Elkhart counties, and perhaps streaming a little farther south from there).

The rest of the state sees nothing tomorrow, Wednesday and Thursday. Clouds will be around and may be tough to break at times, and we turn significantly colder than this past weekend, but we have no new precipitation. Clouds build Thursday afternoon. This will be ahead of a warm front that lifts through overnight Thursday night into Friday morning. Precipitation totals can be from .1”-.4” liquid equivalent with coverage at 70% of the state. We can see a mix of precipitation types, as warm air is surging in, but may not be here immediately at the outset of moisture Thursday night. We should see a brief push of clearing Friday afternoon.

Rain is back for Saturday and Sunday, and we could see a lot of it. We look for half to 1.5” rain totals over 100% of the state. All liquid. The map above shows the set up Saturday afternoon.

We see clouds to start next week, and we can’t rule out flurries Monday and Tuesday on the backside of the weekend system. But temps are falling. Clouds mix with sunshine next Wednesday and Thursday. The rest of the extended 11-16 day period gets more active again. Clouds increase for Friday the 7th, and we see rain change over to snow as the day wears on. Some of that snow can be heavy into Saturday morning, but it is way to early to dive into the track of the event. Lake effect snows continue on Sunday the 9th. We see partly sunny skies over most of the state for the start of the following week on the 10th and 11th. However, lake effect snows remain over the northern third of the state those days.