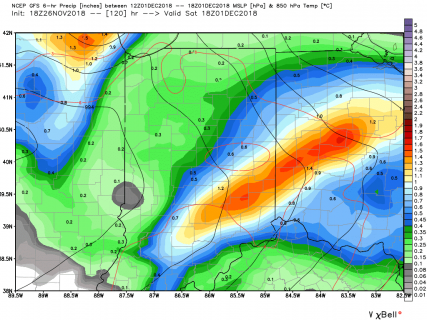 Plenty of clouds around today, but more so in the northern part of the state, where we can see some lake effect snow off and on through the day. Most of this will be limited to the typical lake snow areas and will not drift too far south of US 30. The rest of the state will see a mix of clouds and sun, but significantly colder air will continue to blast in out of the NW, leading to even colder wind chills. We stay cold with partly sunny skies for Wednesday, and on Thursday we start with sun, but see clouds increase as we gear up for our next chance of precipitation.

A warm front lifts through the state overnight Thursday night into Friday mid-morning. This warm front likely triggers scattered precipitation totaling a few hundredths to .3” over 60% of the state. While we can see rain or snow showers with this frontal passage, we think that snow will mostly be limited to areas from US 30 northward. Precipitation is done by midday, and we should remain mostly cloudy for the balance of the day Friday. A cold front and a strong low-pressure center arrive for Saturday and move off to the east and north Sunday. This will bring moderate to heavy rain Saturday, and then scattered showers with wrap around moisture on Sunday. Combined rain totals for the event will be from half to 1.5” and 100% coverage. This will be a significant rain event, fueled by warm, moist, south flow into the state. The map above shows the set up for Saturday afternoon.

We turn dry and colder for Monday -Wednesday of next week. Light snow is possible Tuesday (lake effect snow) in northern Indiana, and on Wednesday (fast moving clipper system) over the central 2/3 of the state. Totals are not impressive enough to really talk about at this time, but a fresh coating is likely. We turn out partly sunny and cold for next Thursday.

For the extended period, we are keeping an active pattern in over the state but shifting timing a bit. We have a chance of light snow in over 50% of the state next Friday with a coating to an inch possible and 60% coverage. Then a chance of snow comes in next Sunday, the 9th, from I-70 northward. Most of the significant snows hit MI or OH, but we won’t rule out flurries over about 60% of the state from I-70 northward. Some of this will linger into the following Monday and will still be mostly north of I-70. The rest of the week after next looks dry, but we do see a significant mild push for the 11th through the 13th, as temps go above normal.