Rains will be somewhat limited today, with a few scattered showers popping up near the Ohio River. However, most of the state should see little to no action, and down south we only look for a few hundredths to .15”. Today will be the proverbial “lull” in the action. 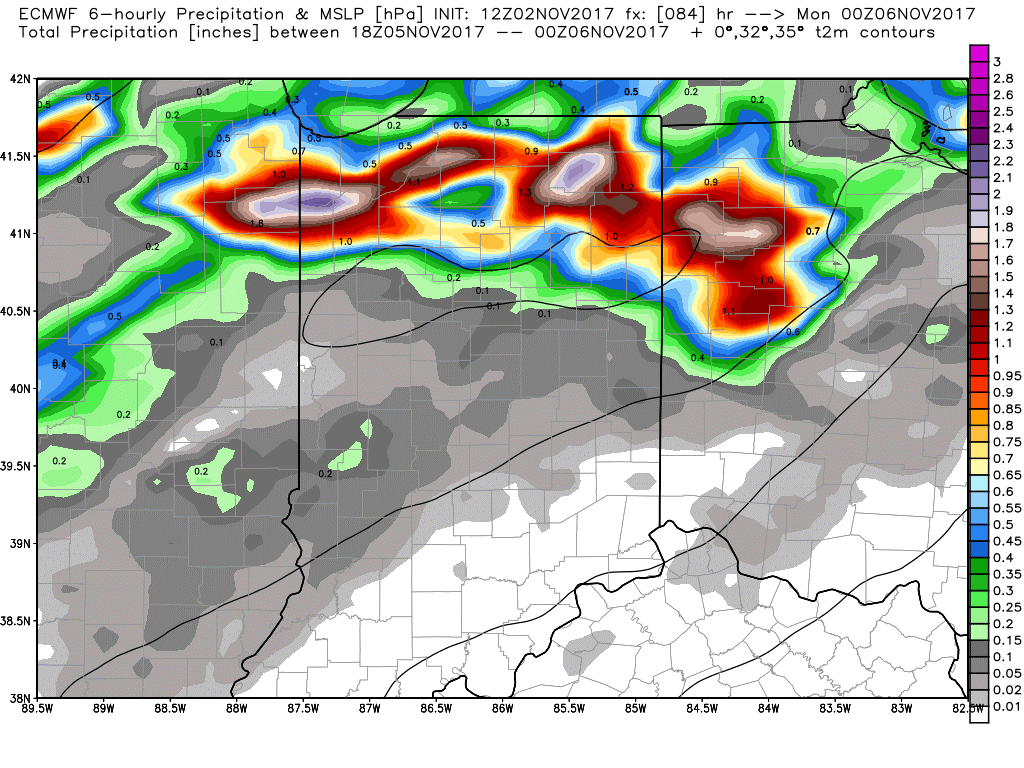 Tomorrow showers are back with more frequency and intensity. WE look for .05”-.5” rains over about 70% of the state. The heaviest rains likely develop over the northern half to third of the state, while farther south, we may miss out. This is just a precursor to the final frontal passage in for Sunday. This front looks stronger now, and we are raising precipitation totals for this part of the event. WE now look for .5”-1.5” of rain over 90% of the state. The map above shows a snapshot of action around Sunday evening. There is potential for strong thunderstorms and we won’t rule out even a few severe storms, but we think that severe weather is being talked up more in other parts of the media than really needs to be. Heavy rains will be in over areas from I-70 north for Sunday evening, and moderate to heavy rains then slip south of I-70 for Sunday overnight – past midnight.

Colder air moves in for Monday behind the front. WE can see some lingering showers or thunderstorms near the Ohio River in the morning, but they will be retreating south and east rapidly. Clouds may even part for some sun in the northern third of the state by late in the day Monday.

Tuesday and Wednesday are interesting, in that we have a quick moving upper level disturbance wanting to come out of the SW Corn Belt. IT mostly looks to stay south of the Ohio River valley for the period, but may throw clouds and a few showers up into extreme southern Indiana for those days. Meanwhile, up north, we likely see no impact, and will see just a mix of clouds and sun. This system had been projected to move farther north previously this week, but seems to be running out of the energy needed to lift north. We will watch it, but think that the chances of secondary moisture next week at midweek are lower this morning. In fact, we are looking for a dry set up for Thursday on through Sunday, with the exception of some clouds and a renegade shower or two over northern Indiana Friday morning and midday.

For temps, we remain well above normal today through Sunday. Colder air is in Monday and we see most of next week normal to even slightly below normal. Then ahead of the system for the 13trh-14th, we have temps bouncing higher again, to be followed by a dramatic fall off at mid-month. We should be well below normal as we kick off the second half of the month.