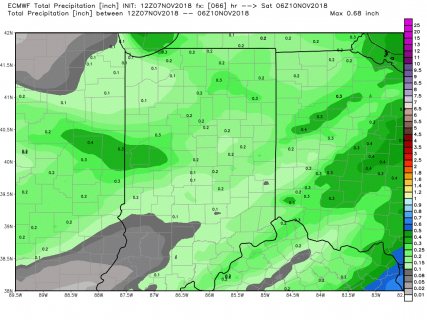 Dry weather holds through the day today, but we will see clouds start to build as we move through the later part of this afternoon and tonight. Temps stay on the cool side, but we will be getting much colder this weekend.

Our next system pushes rain into the state overnight tonight, beginning after midnight for the most part. Moisture is developing along a line from northeast TX up through Ohio over the next 24-36 hours. However, we also have a little bit of action rotating in from the NW at the same time, and that will allow for moisture to spread over most of the state for Friday. Moisture totals still do not look all that impressive here, with amount from a few hundredths to no more than .4” liquid equivalent. However, temps overnight tonight are near and below freezing, and tomorrow we have trouble rebounding very high, which means we can see some wet snow either by itself in spots, or at least mixing in with light rain at times…so be prepared for a sloppy wintery mix. The map at right shows total liquid equivalent precipitation through midnight tomorrow night.

Dry and significantly colder air returns for the weekend. Temps will be well below normal, and there no change in our thoughts about the potential for Saturday to see daytime highs stay below freezing over the northern quarter to third of the state.  Sunday can be sub-45 for highs over most of the state. That dry spell holds through Monday morning to start next week as well.

We are having to make some changes in the forecast for next Monday afternoon, Monday night and early Tuesday. Another wave of moisture looks to move in from the west and southwest. Moisture totals are not all that impressive, with rains of a few hundredths to .4” liquid equivalent. Once again, though, cold air is the story, with most of the state seeing temps Monday afternoon no better than 30-38 degrees and falling off into the upper 20s and low 30s overnight Monday night. This means we are looking at some snow, or at best a rain and sloppy wet snowflake mix.

Most of the rest of next week is dry, from Tuesday afternoon through at least Friday. For the extended period, we are keeping a rather active set up for most of the period. Rains develop around Sunday the 18th and linger through Wednesday the 21st. We see at least 2 waves of moisture moving over the eastern corn belt in that time, perhaps more. Combined rain totals will be from .25”-.75” with the heaviest rain chances in the southern half of the state.