Pretty nice weather back to us today, even though we are working on a cool start this morning. Strong high pressure finds itself nearly right on top of us this morning, positioned over northwest OH. You usually find the coldest air in any new air mass near the center of high-pressure circulation. This high will move off to the east today, and we should see some south winds develop up the backside of it tonight into tomorrow. That should allow for some moderation in temps as we finish the week, but it will be a short-lived south push. A second high-pressure dome rolls back in for Saturday. That means we see a similar chilly start to Saturday morning as well like today. will re-emerge for Saturday. Look for a chilly start today, and a similar chilly start to Saturday. 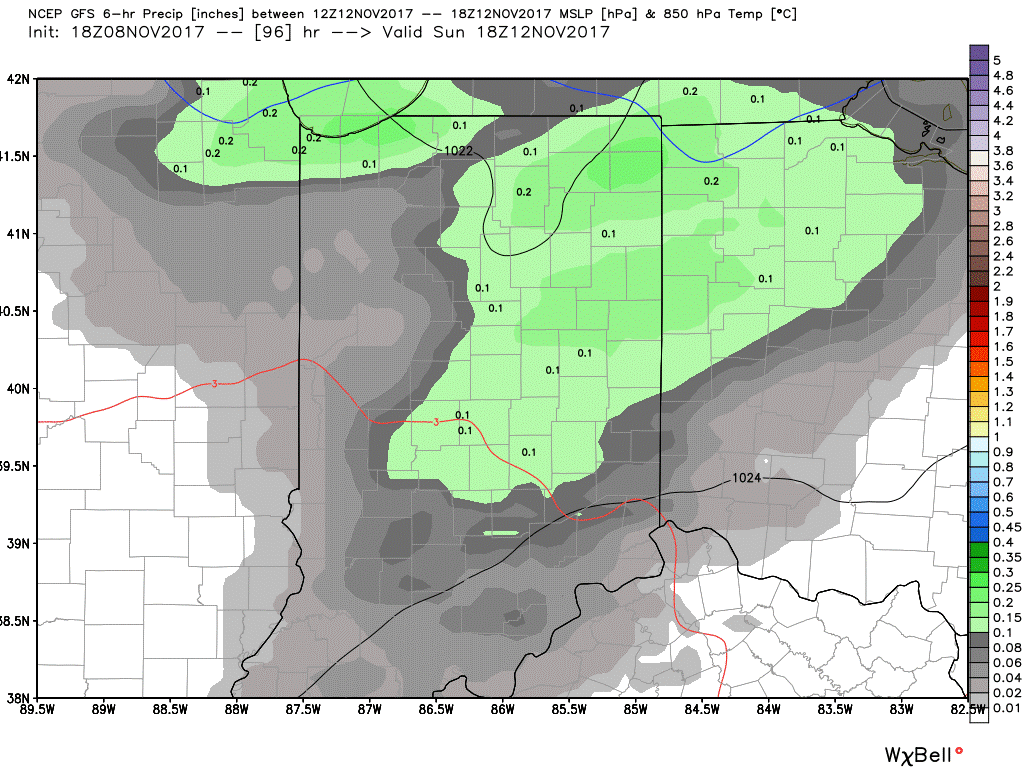 Rains remain on tap for Sunday, but the system looks to delay about 8-12 hours coming in from the west and is also shifting its leading edge a bit farther south. That means we should start to see clouds just ahead of sunrise Sunday morning and scattered light showers by early afternoon. Rains continue to move east through the rest of the afternoon, with the focal point of the best precipitation working down into the central part of the state. We are leaving rain totals at a few hundredths to half an inch but will put coverage at 70%, which is a bit lower than where we were at 24 hours ago. The map above shows a snapshot of action Sunday afternoon.

Dry weather is back following that front on Monday and at least Tuesday. Sunshine should be a major player in that period. South winds start to develop Tuesday ahead of our next potential wave coming in Wednesday, and that will lead to moderating temps for at least midweek, and we think even most of the balance of the week. However, some questions linger around that midweek precipitation threat this morning. Western development of that wave is taking a backseat. As such, there is some concern that the little trough may end up hitting eastern parts of OH only and skipping Indiana. So far, only one model run has suggested this with any major strength, so we are waiting to see if there is any confirming data to back up such a change in our forecasts. At this time, we will keep scattered showers in our forecast for next Wednesday with rain totals at a few hundredths to a few tenths, and we will pull coverage back to about 60%. However, we may have to make a more dramatic change in the forecast tomorrow before the weekend hits, so stay tuned.

A stronger frontal complex is starting to show signs of re-strengthening toward the end of the 10-day period. The current iteration hints at rains from .2”-.6” in over the state for Saturday the 18th into early very Sunday the 19th. Coverage could be as much as 90%, but this storm is in the early stages of coming together. And, this wave has gone through several false starts so far. But, south winds ahead of it keep temps near to slightly above normal the second half of next week, and could help enhance precipitation and strength…so we are introducing it back into the forecast this morning.

The extended period still looks pretty tranquil, at least for the start of it. We have high pressure in control from the 20th through at least the 22nd. There still is the potential for a stronger frontal complex coming together close to or on Thanksgiving, but confidence is low at this time. If it still comes together, it has a potential for half to 1.5” rains. But…don’t get bummed out about Turkey Day just yet…we think this system can easily modify, track differently, or even just fall apart.