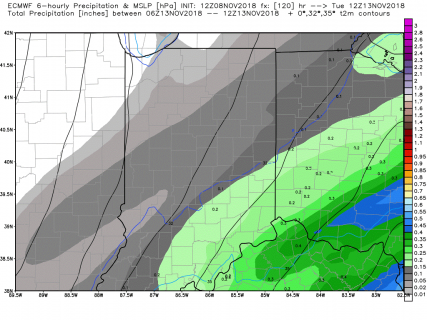 Light precipitation has spread into the state this morning, and we will see that precipitation fall as light snow. As temps warm a little bit this afternoon, look for some rain to mix in at times. The snow will create minor accumulations on grassy surfaces or cars but should not be an issue on roads. Liquid equivalent precipitation will be from a few hundredths to .3” with coverage at 100% of the state. Temps will promote mostly rain over the southern third to quarter of the state.

Dry and significantly colder air blasts in behind the front for the start of the weekend. Temps will be well below normal. Saturday will see highs struggle to get out of the mid 30s over a large part of Indiana, and we will see strong NW winds making it feel colder than even the mid-30s. Sunday we should be a little better, but still may see most of the state staying below the lower to mid-40s for daytime highs. At least we think sunshine will be an increasing commodity through the weekend. Dry weather holds through Monday morning.

Clouds start to build Monday midday and afternoon, and our next round of precipitation rolls in late Monday evening through the overnight. This system looks very similar to what we are experiencing this morning. Snows move across the state from midnight on forward through Tuesday early afternoon. Moisture totals look similar too, with a few hundredths to .4” of liquid equivalent around, coming mostly as snow. This would trigger snow accumulations again of a coating to an inch on cars and grassy surfaces. We likely have precipitation stay rain down near the Ohio river, and that may be where we see the chances for the biggest rain totals too. The map shows a snapshot of action near sunrise Tuesday morning.

Behind that event, most of the rest of next week is dry. Clouds will be slow to break Tuesday night, but we should see better sunshine in for Wednesday through the weekend, including Sunday. For the extended period, we still see a rather active pattern setting up, but we are delaying it just a little bit. We are pushing rain s back into a period from the 21st through the 23rd. WE are also opening up the door for higher moisture totals out of the event. Warmer temps mean all rain at this juncture, and also may fuel some thunderstorm potential in southern parts of the state into Kentucky. Rain from the 3-day period can total half to 2” with coverage at 80%. We go drier again behind that system for the 24th forward, but temps stay normal to above normal…we do not see a strong cool down at this time.