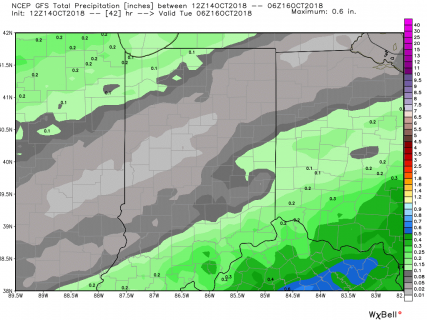 Some relatively minor moisture moves across the state today. We still think the best action today will end up being in southern Indiana, but we are not ruling out showers up north either. Rains from I-70 southward can be from .25”-.66” with 70% coverage, while north of I-70 today we can see a few hundredths to a tenth or two. Coverage in the north can be 40-50%. Everything should be winding down by this evening, if not before. The map above shows expected rains through sunset tonight. The front that brings this moisture in also brings another push down in temps via colder airmass. There will be some frost tomorrow morning, although at this point we do not expect it to be a strong frost, but a large part of the northern half of the state may be 35 degrees or below.

Tuesday starts a mostly dry stretch. Right now, we are going to stick with our thoughts that this dry period runs a good 10 days. As with last week, we are still keeping a bit of an asterisk on this late this week into the start of the weekend. Some models are bringing a chance for a bit of moisture across the state from later Friday into Saturday. We won’t rule out spotty action at this time, but it is not enough for us to talk up moisture and harvest interruptions. It is a period of time that we will watch closely through the coming few days, and if we are making changes to this dry forecast, they will come sooner rather than later.

All models are in agreement on dry weather again from Sunday through next Thursday. Temperatures will remain mostly normal to a bit below.

The extended 11-16 day forecast period looks drier, and we are pushing our next front back a few days. That cold front may not move over the state until closer to the 29th, but still holds potential for a quarter to half an inch of liquid precipitation.