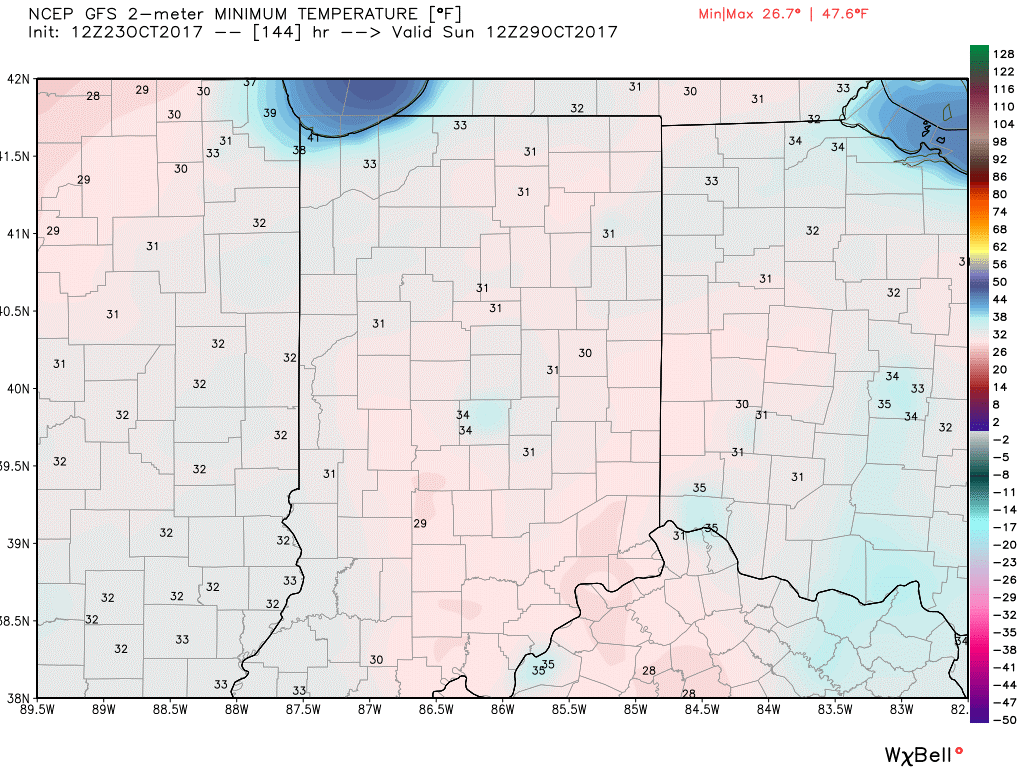 Our front is off to the east this morning, but we are dealing with wrap around moisture. This is triggering clouds, cold air, some gusty winds and even a bit of spit/sprinkle activity. We do not expect a lot of new precipitation this today, but the overall cold, damp, cloudy, nasty feel will hold all the way through the day and through tomorrow. The long and short of it is: there is no way we see any kind of “drydown” in the next 48 hours.

The coldest part of this air mass is here tomorrow. If we get clearing soon enough, we have to leave the door open for some patchy frost tomorrow night. We do not think it’s a very big deal at this time. A much bigger frost event is coming for this weekend, and we will touch on that below. But, there is some nice cold air in here later tomorrow afternoon and evening. Sunshine is in for Thursday and Friday. As winds turn some to the southwest we will see temps moderate slightly. However, it would be wrong to use the word “warming” here, because honestly, this will be nothing more than a bounce off of the peak of cold air from midweek.

Our next front is here on Saturday. It looks a little more impressive this morning, with rain totals ranging from .25”-.75” and coverage at nearly 100%. The rains will cause another slowdown in fieldwork potential (but can you really slow it down, if it never really ramped back up very much?). However, the bigger story will be the cold air coming in behind that front. It is a strong push of cold air from the north and west, and it will likely bring our first good frost of the fall season to a large part of the state. The best chance for the frost will be early Sunday morning and we could see a repeat Monday morning (although the best chance for frost to start next week will be a bit farther off to the east). The map above shows overnight low temps as of 7AM Sunday morning.

We still have a dry forecast for a large part of next week. No new rain in Monday through early Thursday morning. We still see some late week shower potential, but it has advanced forward just a bit, looking more toward Thursday mid to late morning through evening. The may just end up being a precursor to a much larger system for the extended 11-16 day forecast period. Time will tell. For now, we look for at least some clouds next Thursday and will be open to adding a few scattered showers into our Thursday afternoon forecast if this moisture continues to show the ability to hang around. Totals will be very, very minor.

In the extended period, we still have a strong storm complex forming in the plains with significant cold air pressing in from the north and northwest for late the 4th through the 6th. This likely is the first big potential winter storm out there, but here we still like rain. We have action arriving later the afternoon of the 5th and extending through the 6th, and we are keeping rain totals at .5”-1” over 80% of the state. This is a system to watch, but for now, we are not spending too much time on it until it gets into the 10-day window and we can really start to track its development. There is significant cold air behind it and we maintain our thoughts of a good hard freeze event in its wake.