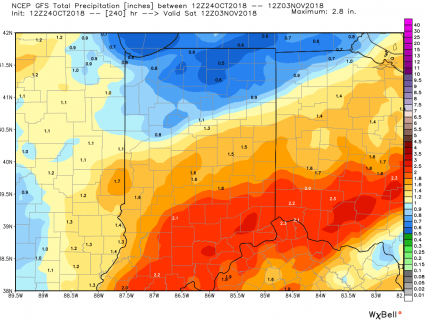 One more fully dry day statewide, and then we have some changes coming to our weather pattern. We are going to have to close the harvest window a little sooner in some areas than we had hoped, but the change in pattern to a wetter and more active outlook is still on the way.

Today, high pressure moves off to the east slowly. We see moisture today moving across the western and central corn belt, but it will not be able to make it in here. It should be another excellent day of harvest.

Friday brings cloud cover and moisture over a large chunk of the state. We are bumping our moisture farther north, up to the US 24 corridor. From there south to the Ohio river we think we can see rains Friday from a few hundredths to perhaps .5” with the heaviest in the southern third of the state. Northern parts of the state will stay dry, giving statewide coverage at 60%. The moisture moves east and dissipates for Saturday, but then another wave is back for Sunday. This trough moves through from west to east and will have another round of showers with it. Rain totals Sunday can be from a few hundredths to .4” over 90% of the state.  Clouds and some hit and miss moisture (a tenth of an inch or less) will linger through Monday. So, the rain comes sooner, over more of the state, and still lasts through Monday…meaning harvest will slow. It probably wont stall…but we will not be dealing with anything like what most of this week has been so far.

Dry Tuesday and next Wednesday. Moisture looks like it wants to even delay its arrival further through Thursday. We can see showers move in as soon as Thursday early afternoon, or as late as Thursday night, but either way, once the rain starts there, it continues through next Friday. Rain totals can be from .25”-1” combined over the period with 90% coverage. The heaviest rains will fall in southern Indiana.  The map at right shows cumulative 10-day rainfall over the region, but is likely a bit over done in the southern half of the state.

The delay in arrival for next week’s system actually backs up the flow just a little bit. WE now see the line up for the 11-16 day window pushed back. Rains develop late the 4th through the 5th, giving .25”-.75”, and then another front comes through for the 7th into the 8th with similar rains. We are also still keeping rains in for around the 11th, which remains just outside of our 16-day forecast window. Still, it means we are not backing away from our assertion that the first half of November will be nothing like most of October…it will be much more active, and much wetter.