A dry day today, but we have some changes to the intermediate forecast this morning, and they are a move to a wetter forecast solution. Today we have high pressure in over the state, and that will bring sunshine and some fairly nice weather, all things considered. We will see clouds hold off on their build until tomorrow. 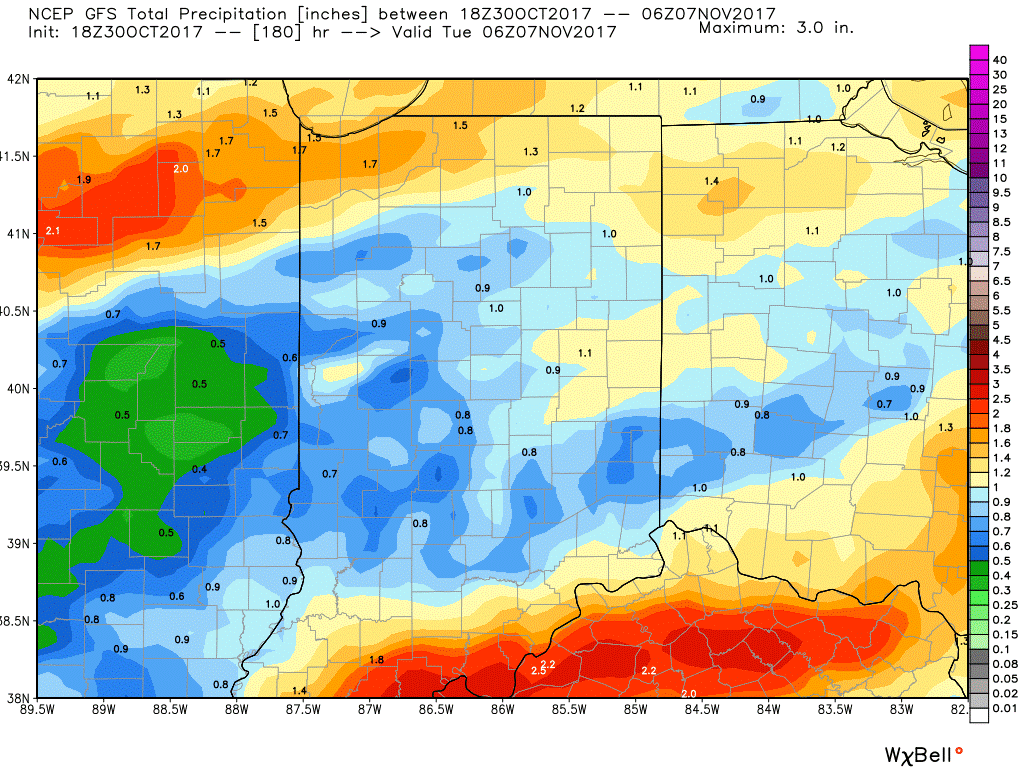 Our next system will be working into the region later tomorrow afternoon and evening into Thursday. Then the rains continue off and on through the entire day Thursday. We like rain totals from .1”-.6” over 90% of the state. These will mostly be gentle rains but will lead to enough moisture to slow potential for field work once again. Action tomorrow will be limited mostly to areas of central and southern Indiana, as this disturbance builds in initially from the south and west. Temps will be the warmest of the week on Thursday as south winds reach a zenith ahead of the cold frontal passage.

Changes to our forecast come for the finish of the week and weekend. We actually think it will be difficult to differentiate between waves of moisture coming through as we head toward our next system. In fact, we look for moisture to be with us off and on through Friday, Saturday, and Sunday, right on through early next week. It won’t rain constantly in there, but we see several disturbances coming through, punctuated by a final strong front late Monday evening into early Tuesday morning. That last front still has some thunderstorm potential. The best way to look at this set up is to suggest combined 6-day rain totals, from tomorrow night through next Tuesday morning at .5”-1.5” over 90% of the state. Again, it will not rain constantly through the period, but we also are not sure we can call for any specific day where there is no rain threat. AT this point, to try and finesse the forecast that much, it’s just asking for trouble. The map above shows combined rain potential through next Midnight next Monday night.

We still look for colder air to return behind the front that finally leaves next Tuesday. However, we also should be dry for most of the rest of the week as those temps work back closer to normal or even a bit below. We kick off the extended period with a threat of action on the 13th and the 15th, but both fronts look relatively minor, and the potential for a strong front passing by to the south looks to stay well to the south.