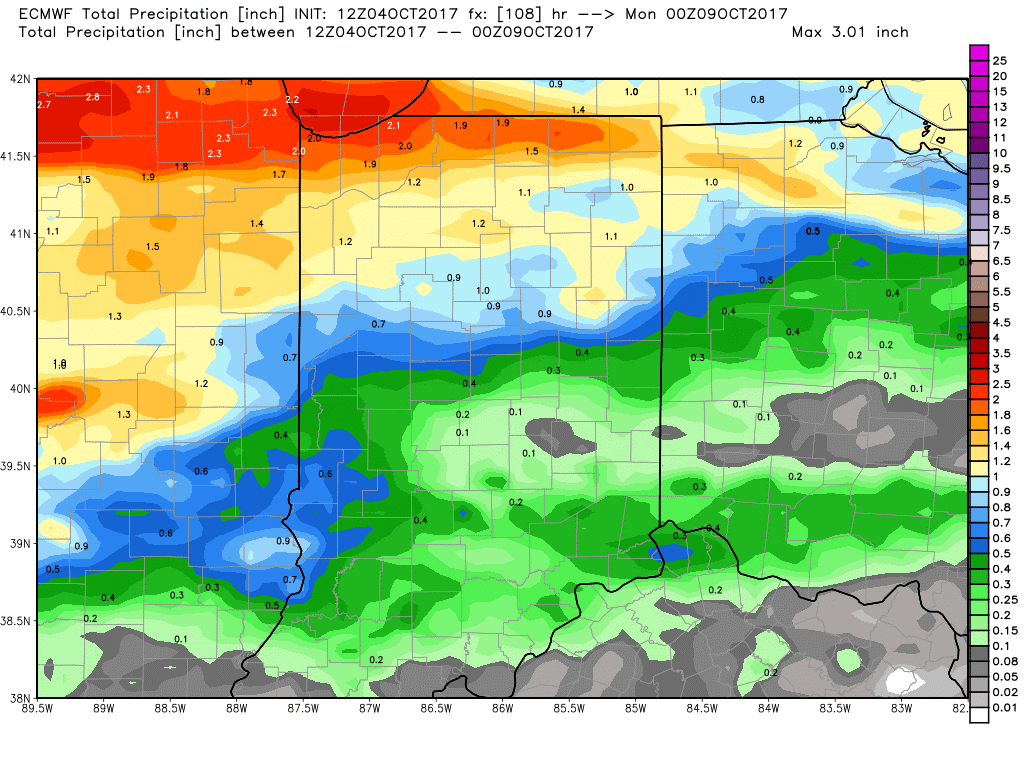 As we continue to move through a damp finish to the week over the state, it presents a somewhat tricky forecast. A frontal boundary started to nose in yesterday. The southwest part of the front will remain anchored in Oklahoma for the next 24-36 hours, allowing for the front to slowly sag south and southeast through the state. This movement will be at a snail’s pace, meaning that the action actually will appear to be along a stalled front at times. Several pulses of energy will move up the front, and those pulses will be what fuels rains over us today, tomorrow and even into Saturday. It’s kind of an interesting set up, and it will lead to excellent to even excessive rains in some areas, while others miss out. Todays’ action will be scattered and somewhat light, bringing a few hundredths to half an inch across about 60% of the state. The spread across the state will pretty even north to south, but there will be a lot of holes in the action. Tomorrow, we can see an additional .1”-1.0”, but mostly over the northern half of the state, while southern Indiana gets nothing. Thunderstorms will key for getting into the upper part of that range on Friday, and right now the thunderstorms look most likely over far northern Indiana, mostly north of US 30, but definitely north of US 24. Then for Saturday. We finish it off with a final weak pulse of moisture coming through, acting more like the last sweep of the front. This will trigger showers mostly in the afternoon and evening through midnight. Rains can be a few hundredths to half an inch, coverage at 70% of the state. Sunday should be mostly dry. If we put it all together, from this morning through the weekend, we can see an additional .3” to 1.5” over about 80% of the state. Lower rain totals will be seen in southern Indiana, and the highest rain totals will be seen in far northern Indiana. The map above shows potential cumulative rain totals through Sunday night.

The old frontal boundary will be south and east of the state as we start next week, but another low moves up it like a 4 lane highway. IT will bring rains mostly to Ohio overnight Sunday night through Monday, but we will not rule out up to half an inch of rain in southeastern Indiana in the Sunday overnight to Monday midday period, mostly south and east of a line from Richmond to Corydon. The rest of the state will be dry, and sunshine should be a big player in many areas to start next week.

The rest of the week should be dry state wide, and we see a fairly breezy week as well, north winds will be see for the Monday-Tuesday-Wednesday period, and then we transition to west winds to finish the week. The winds will give a good boost to drying following the rains we pick up finishing this week and the weekend. Temperatures will be back closer to normal, but should not be considered cold by any stretch. The dry, sunny, harvest supporting weather should hold through next weekend and through the first part of the following week.

We continue to see a very strong front in the extended 11-16 day period, but it continues to move very slowly. We have taken about 2 days off its anticipated arrival so far, and we may have to do a bit more. But, the front is slowing, because it is getting stronger itself, and it is strengthening because the air mass behind it is getting colder. This will be a significant frontal passage and may usher in some “first frost” type condition is its wake. At this time, we have the front arriving on the 18th, sweeping through the 19th and bringing rains of half to 1.5” on 90% coverage. Our bias is that this front could slow just a bit more. The good news is that further slowing would give more harvest opportunity. The bad news is: further slowing will likely mean even more rain from that front. Either way, we cool for a brief period the last 10 days of the month.