Mostly dry today and tomorrow. Notice we still are saying “mostly…”. Much like yesterday, where scattered showers reared up and moved over parts of the state, we can’t rule out a bit of action today and tomorrow. However, it should be smaller in scope than yesterday, and be less intense. Still, we can’t completely wave the all-clear flag yet. Temps stay at above normal levels, and south flow will keep humidity levels elevated. 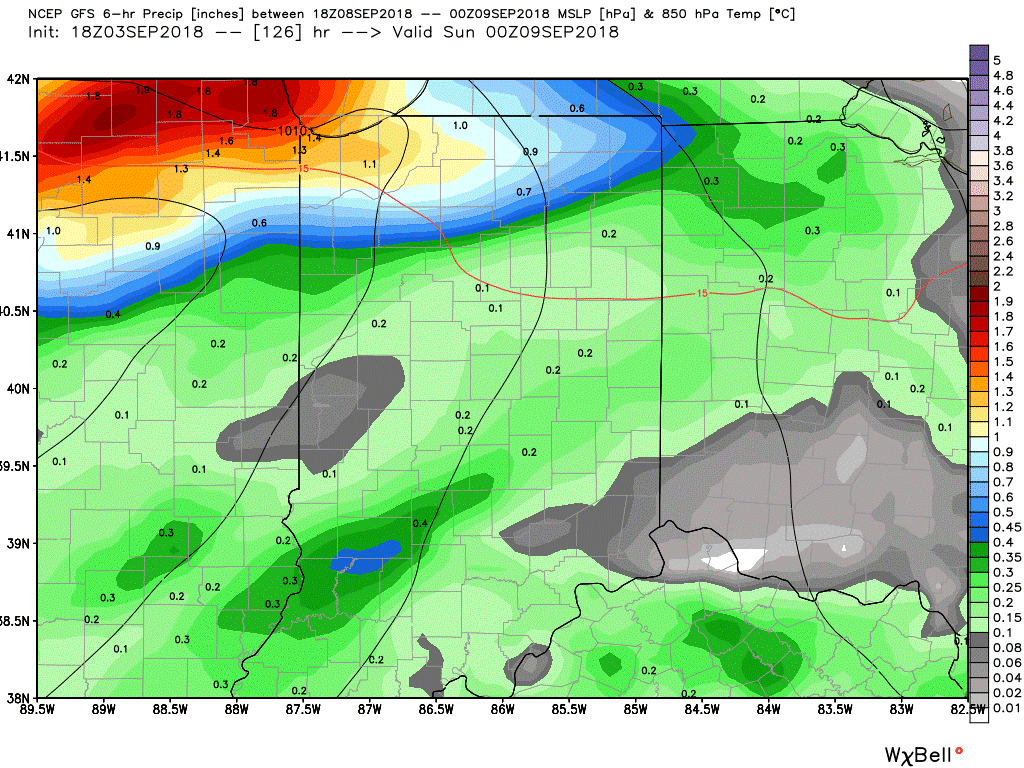 Our next good threat of rain comes Thursday, and that kicks off a fairly active weather pattern over the state. Thursday, we see a front sweeping in that brings rains on the order of a quarter to three-quarters of an inch over 80% of the state. These rains will slowly sag through, mostly drifting from north to south. This should lead to a mostly dry Friday, although we expect some lingering showers through at least the morning in far southern parts of the state.

A strong frontal complex approaches from the west on Saturday and looks to be augmented by the remains of the Tropical system “Gordon”. We will see a large segment of the state dry through the day Saturday, but the thunderstorms to the west will be impressive. We think this system actually speeds up a bit, and we have to allow for showers and thunderstorms Saturday afternoon and Saturday night. But, the big push of rain comes Sunday as the actual remaining low from Gordon sweeps right across the state. Rain will be heavy, and thunderstorms can be strong, especially over the northern half of the state. The rains can linger through Monday, particularly down south. All told, weekend rains can be from half to 2 inches, and we have a concern that the northern quarter of the state can exceed that 2-inch upper limit. However, we are going to stay conservative in the forecast for right now. The map at right is a snapshot of potential Saturday evening.

Midweek next week can be very interesting. We are keeping rain in the forecast for late Tuesday through Wednesday and Thursday. However, the little disturbance that tries to work through is completely cut off from any significant circulation. This means the precipitation potential is light, and may easily go away, depending on how the weekend storm complex lifts off to the north and east. We can see this period ending up drier as we get closer to it.

For the extended 11-16 day forecast window, we have a minor front toward the end of next week late Friday that brings scattered showers and rain potential up to .25” to about 50% of the state. Then toward the end of the extended period, we have a stronger system working in that has a potential for half to 1.5” rains over 80% of the state. The pattern looks like we continue to see ample moisture into the start of the second half of the month. Whether it turns out to be excessive or not remains to be seen…but the tropics are getting much, much more active, and if the track of the tropical storms heads into the gulf, it would help keep the pattern wetter.