Rain is here, and we are going to be in a wet pattern for the next week or so. In fact, our forecast is wetter this morning, mostly due to the fact that scattered showers linger longer next week. But, before we get there, let’s take a look at the short-term forecast. Today and tomorrow we see scattered showers moving across the state. Rain totals combined will be from .25”-.75” with two-day coverage at 80%. This will come as an offshoot of a cold front that has been making its way across the upper Midwest and western corn belt over the past 2 days.

The remains of tropical system Gordon will move into Indiana Saturday, and we expect moderate to heavy rains on through Sunday. Right now, we will keep our general rain totals at 1-3 inches with 100% coverage, but we are also going to put in some 4 and 5-inch totals near the low-pressure center. This should not be over an exceptionally large area, but we also are not zeroed in on the best areas to see it either, as it will be largely dependent on the track of the system. Just be prepared for some significant rains over the weekend. The map below shows potential rain totals through Monday morning. 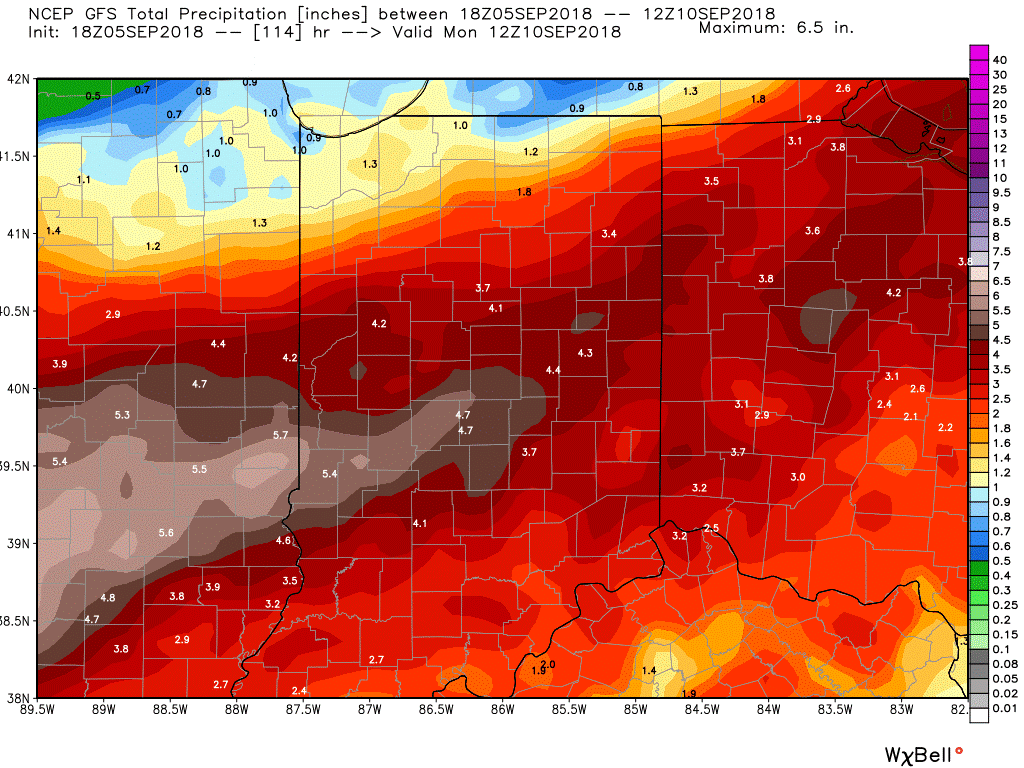 Scattered showers end on Monday, and they actually look like they can end sooner than previously thought. This will bring a break in clouds for late in the day Monday. Tuesday also looks drier, as most of the state stays precipitation free. We can see a few scattered showers developing near the Ohio River through the afternoon and evening on Tuesday, but they do not look like they have as much of a northern push and should stay well south of US 50.

Moisture is more prevalent for Wednesday through the end of the week. For Wednesday itself, we see showers and thunderstorms south and east of a line from Evansville to Dayton, Ohio. These rains can trigger moisture totals of .25”-1” with coverage at 80% of the mentioned region. Then for Thursday, move that line north and west just a bit. We can see scattered showers Thursday south and east of a line from Terre Haute to Fort Wayne. Coverage will be only 60% of that area. Friday scattered showers start over the northern half of the state but may end the day with a few showers farther south. Still, we expect no more than a few hundredths to a quarter of an inch.

We are dry for next Saturday through the following Monday, as we finish the 10-day window and move into the 11-16 day extended period. We are keeping our next chance of rain for the 18th and 19th (Tuesday and Wednesday), although the system looks significantly weaker this morning. We will leave half-inch rain totals in the forecast for now but will lop off the upper end of the range and see how this system unfolds in the coming days. Coverage is being pulled back to 70%. Dry weather returns for the 20th and 21st, with rain likely again for the 22nd.

We see temps pulling back today as the rain spreads across the state, and the weekend should see temps a bit below normal. Then for next week, we warm back up and should see temps normal to above normal. The forecast this morning is very similar to yesterday, but the addition of scattered moisture through the second half of next week gives us a wetter feel, even though we are taking some rain out of the early part of next week.