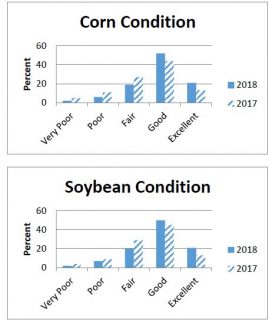 Above average rainfall on already saturated fields slowed harvest progress, according to Greg Matli, State Statistician, USDA NASS, Indiana Field Office. Significant mid-week rain events kept farmers out of the fields for much of the week, particularly in the north. As temperatures fell, the northern part of the State also reported the first instances of frost for the season.

The average temperature for the week was 58.8 degrees, 3.6 degrees above normal for the State. The amount of rainfall varied from 0.12 to 2.64 inches during the week. The statewide average precipitation was 0.72 inches. There were 3.9 days available for fieldwork for the week ending October 14. 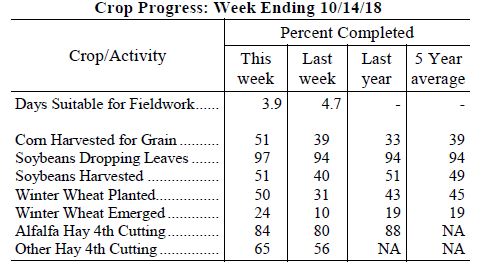 Growers made progress on corn and soybean harvests where weather permitted, with reports of pest damage to the soybean crop in some fields. Livestock were reported in good condition, aided by pasture growth due to the frequent rains. Winter wheat planting continued where time and conditions allowed. Other activities for the week included taking soil samples, spreading fertilizer, fall tillage, and drying and hauling grain to elevators.