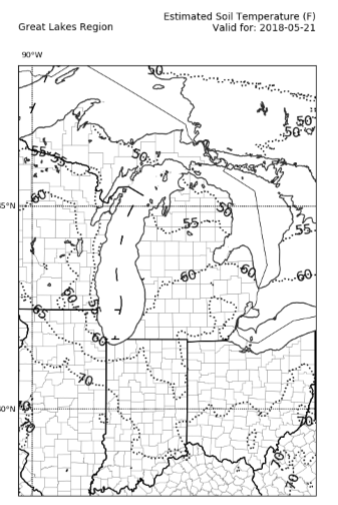 Warm temperatures and scattered showers aided crop emergence last week, while farmers continued to plant at every opportunity, according to Greg Matli, Indiana State Statistician for the USDA’s National Agricultural Statistics Service. Scattered rainfall in the north spurred emergence of planted fields while also slowing the progress of fieldwork. The central and southern portions of the state reported drier conditions that, while favorable for planting, hampered crop emergence and conditions in some fields. The average temperature for the week was 70.4 degrees, 7.3 degrees above normal for the state. The amounts of rainfall recorded at weather stations varied from 0.00 inches to 3.42 inches over the week. The statewide average for precipitation was 0.95 inches, or 96 percent of normal. There were 5.0 days available for fieldwork for the week ending May 20.

Planting progress continued last week, between reports of scattered rain, with both corn and soybeans planted ahead of last year and the five-year average. Winter wheat growth progressed over the week with the scattered rains, but remains slightly behind where it was last year. Hay and pasture are reported to be greening up in the areas with significant rainfall, though the first cutting of alfalfa lags behind last year. Livestock are reported to be in good condition. Other activities for the week include side-dressing corn where possible, completing tillage work, spreading fertilizer, installing tile, and moving grain to elevators. 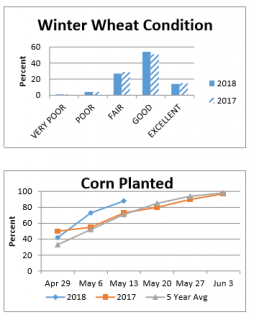 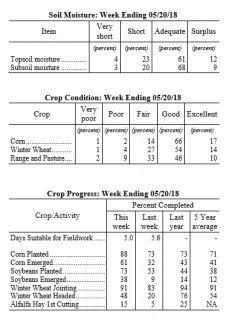