Even though we may have a few lingering showers around to start Sunday, we should dry from Sunday afternoon on through Monday and Tuesday as clearing skies come in behind the system that started off the weekend. Temps will be cool, but should start to moderate as southern flow returns early in the week. Clouds will start to build later Tuesday afternoon.

We continue to see a fairly active pattern, even though systems this upcoming week may not be as strong as recent rains. A quick moving front sweeps through Tuesday night through mid-morning Wednesday. This front has .25”-.66” rain potential with coverage at 80% of the state. This should be seen mostly as a nice, gentle rain…except for the fact that it may interrupt desires to be in the field. An almost immediate move back to sunshine for the balance of Wednesday will be in the cards. 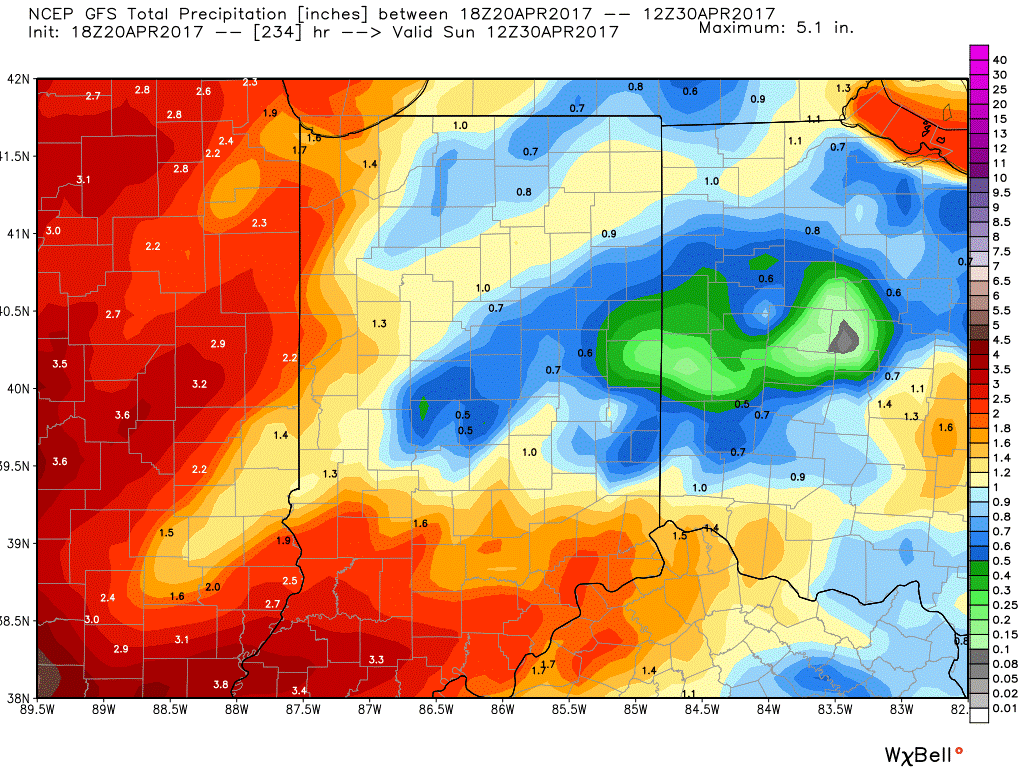 24 hours later, we have a warm front lifting across the state that will trigger some light rains from Thursday afternoon into Thursday night. Rain totals look to be a few hundredths of an inch up to .25” with coverage at about 40%. The rains have the best chance north of I-70. Areas south of I-70 likely stay rain free. However, behind the warm front, we see strong south winds kick up for Friday that will promote some drying, but will likely be too strong for some type of fieldwork. We expect winds next Friday and Saturday to average 12-25mph out of the south at the least.

A strong cold front looks to move in to finish off the 10-day period next Sunday the 30th and it will roll on through the 1st of May. Rains with this front can still be strong…with potential of .25”-1.5” and coverage at 90%. The map above shows 10 day rainfall potential over the state.

We see temps near to above normal, with no major cold. However, the active precipitation pattern likely keeps a lid on excessive heat as well, as temps for the most part average 2-8 degrees above normal into mid may.

We still see two systems in the extended window. The first system, around the 3rd into the 4th, should be relatively minor. It sweeps through quickly…likely 12 hours or less, and has rain totals of no more than .1”-.4”. Coverage will be around 70% of the state. The second system, farther out in the extended window, around the 5th into the 6th, has more moisture with it…rains of .25”-1”. However, currently, it looks like it may want to track more south…bringing rains to the OH River valley, but missing a large part of the state. Right now, we would put coverage at no better than about 35%.

Farther out, for planting considerations, we look for weeks 3 and 4 still have some moisture that we will need to deal with, more so in week three than week four. In week three we have potential for a low crossing the state for the 8th-9th, and then again on the 12th. Precipitation looks to be mostly above normal with below = normal temperatures. In week four, we are watching for a weak low around the 16th, but then a very strong high pressure dome coming in for the 18th, which would signal perhaps an extended period of dryness over a good chunk of the state. Temps look to rebound up to closer to normal levels for that period. See maps below.

Soil temps are not seeing any dramatic changes, although air temps in the 50s for this past Friday and Saturday with overnight lows in the upper 30s and low 40s dramatically slowed warming over the region. However, we did not and do not expect to slip below key thresholds for planting at this time. The map below shows current temps at the surface level. 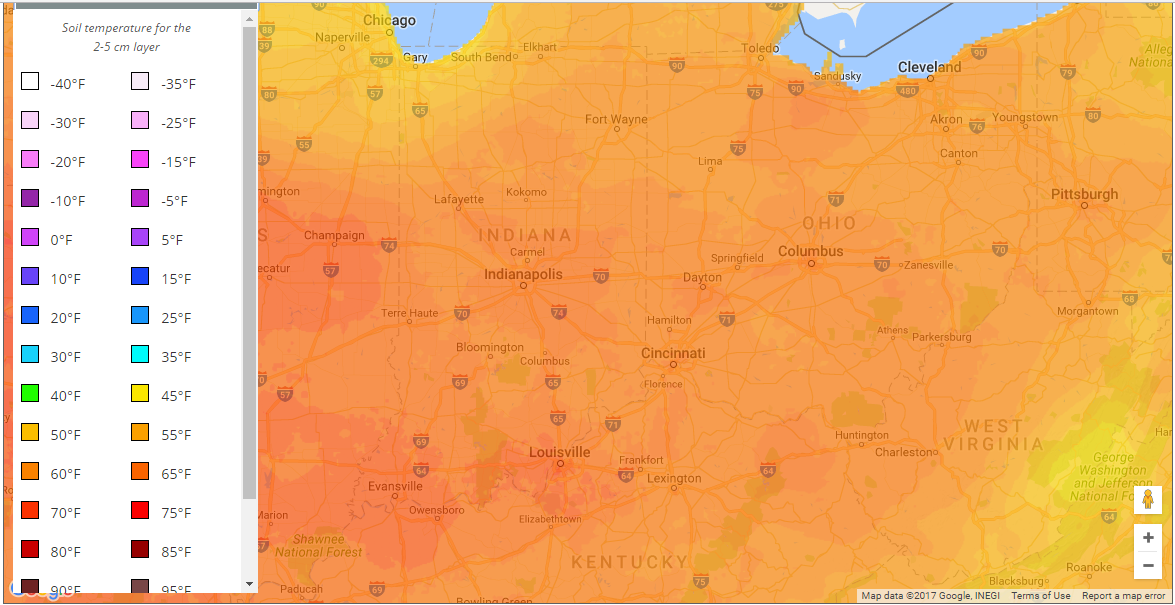