Dry conditions hold as we finish the weekend and move through the first half of the week. Temps will be warm and work higher for the first half of the week, in many cases sitting 5-10 degrees above normal over a large part of the state. The temperature climb will come via strong southwest flow, and we think it will be rather breezy for the period through Wednesday. The stronger the SW wind…the more likely we can see “blowtorch” conditions, where temps easily exceed expectations the best chance of that will be farther west over IA, SD, and even western IL…but we won’t rule it out here. That also means we have less than optimal conditions in our forecast for spraying. The heat is the kind that makes one normally think of pop up afternoon thunderstorms, but for right now, we think that action will be limited through Wednesday morning.

Our next frontal boundary continues to be reluctant to move east in a timely manner. However, we have not seen as significant of delay over the past few model runs. The front should kick off some showers in the northern part of the state overnight Wednesday night and the action continues through the day Thursday. We are putting our rain totals at .25”-.6” with coverage at 80% of the state through Thursday. At this point, we do not expect thunderstorm development and no threat of severe weather. 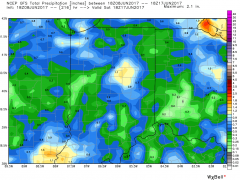 Lingering moisture may play a role in the forecast following that frontal passage. Friday, we should see some sun, but at this point we are hesitant to wave the “all clear” flag. We can’t rule out a shower or two with 30% statewide coverage. However, Friday will be significantly drier than Thursday in a comparative sense. Next Saturday we actually have some moisture backing back into the state from the old, dying frontal boundary off to the south and east. That will bring scattered showers yielding .05”-.3” over about 50% of the state. Obviously there will be plenty of “holes” in the coverage, and we are skewing our thoughts toward more southern and central Indiana on the Saturday wave than farther north and west. The map above shows rain totals for this coming week, through Saturday midday.

In the extended window, models are all over the place. Consensus is trending toward an upper level ridge to start off the 11-16 day period, although we think there can be some minor moisture trapped underneath that ridge. If that is the case, we should see above normal warmth continue, with a chance of some hit and miss showers. However, then the GFS is convinced we have a strong tropical system coming through the Gulf, and it brings the system right up the Mississippi river valley and into the eastern corn belt. The Euro and others do no such thing. The GFS is notorious for screwing up and being way to “bullish” on early season tropical systems and waves…so we doubt the solution. Still, it bears mentioning, just in case you hear someone else try and talk up “good rains” late next week. We are taking a drier approach to the total 11-16 day window, looking for a third of an inch or less at this time, with coverage at 60%.

Farther out, for weeks 3 and 4 we see very similar conditions. Both weeks will feature above normal temps, with some periods of well above normal temps. Precipitation looks to be normal to below normal for week 3, and nearly normal for week 4. The most glaring attribute of the extended week 3-4 period is that we do not see many significant frontal passages. That means that large changes in temps, the kind that trigger heavy rains, are not likely, and it will place a higher focus on heat based convective activity (pop up afternoon/heat based thunderstorms) to get rains as we finish June and move into July. Those kinds of events usually lead to much more hit and miss coverage of rains, and that will lead to large discrepancies between the precipitation/soil moisture “haves” and “have nots”.

Soil Conditions:
The drought monitor has been getting a lot more press recently, as areas of the northern plains have moved quickly into an abnormally dry condition. While the Hoosier state is still nowhere near that, we have heard complaints start to come up with more frequency about “needing a rain”. Our forecast here today, if realized, will bring less than an inch of rain in over most of the state through the next 2 weeks, which may start to push us into drier categories on upcoming drought monitors. We have ample subsoil moisture, but a late crop, planted into wet conditions, may have weaker or shallower root systems, and the dryness will be pointed out a little more readily. If rains outperform our forecast this coming Thursday, that would fix everything…but at this point, we have some minor concerns. 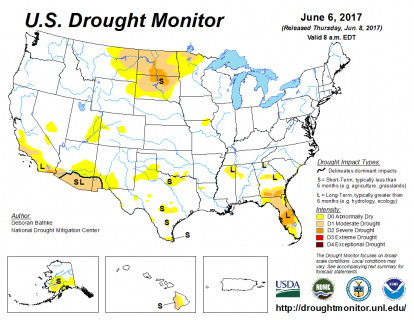