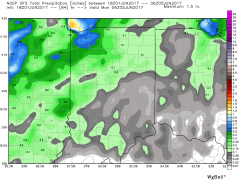 Rain and thunderstorm action reaches a zenith Sunday. Early in the day, we can see stronger thunderstorms over north central and northeast Indiana, and then through midday and afternoon, action spreads south and east. All told, we will put rain totals at .25”-1”, with the high end of the range reserved for areas with thunderstorms to start Sunday morning. Still, coverage will be only 60% of the state with any rain at all, which means a good chunk of the state will see precipitation of less than half an inch or none at all. This map shows the cumulative rains through Sunday midnight.

The entire upcoming week is dry. Dry weather returns for Monday, although with north winds on the backside of the weekend storm complex Monday may keep temps down a bit. But in general, we will see normal to above normal temps over the state through the week. The only area of concern right now is a weak front that slides into the state Thursday. WE think this promotes mostly cloud cover, but we will be keeping an eye out for spits and sprinkles out of that over about 30% of the state. There is no significant threat of moisture at this time.

We have taken rain out of the forecast for next weekend, and are not going to revisit that again until later this upcoming week. Clouds may be around for Saturday, but we don’t think they bring a chance for more than a few spots here and there. There is a minor trough involved with this, and if it strengthens, we will have to tweak the forecast wetter again. But, if the week turns out as dry as we expect, it will be hard to overcome that dry atmosphere with just a small minor trough during the period. Sunday should also be dry.

We start the extended period with a strong low sitting over the great lakes on the 12th, with a cold front extending west-southwest. However, that low is slow to move, and the front may not sag into the state until closer to the 14th. Once it comes through, we see rain potential of .25”-1.25” with coverage at 100% of the state. Right now this is slated for the 14th-15th…but the timing depends on the movement of that low over the great lakes. Another strong low-pressure system developing in the northern plains/western corn belt/upper Midwest for the 17th likely brings rains to the Hoosier state around the 18th, with rain potential of .25”-.75”.

Further out, we see normal to a bit below normal temps for week 3 and normal precipitation. We start the week period on the 19th with strong high pressure and a supporting upper-level ridge. That will give way to a strong cold front later in the week, around the 23rd-24th. The front brings rains of the half to 1 inch with coverage at 80% of the state. There could be some strong storms embedded in that frontal passage. For week 4, a strong storm complex starts it off for the 26th-27th, bringing half to 1.5” rains and 90% coverage. That system is followed by a weaker front around the 30th, and then a nice upper-level ridge behind it. That will lead to a very warm and dry start to July. Overall, week 4 should have normal to above normal temps and normal precipitation.

Soil temps as of this past Thursday (if you are curious). No story here. Perhaps a story up in WI and MN…