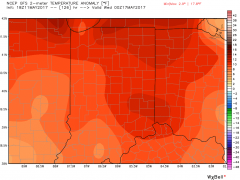 Dry weather dominates the state for the next six and a half days! Clouds may be slow to break up in spots today, and temps remain on the cool side, but the pattern shows gradual improvement through the period, and most importantly – NO RAIN! Temps begin to tick upward over the weekend and the first part of next week should show temps at normal to above normal levels. Most of the state may be pushing the low to mid 80s by Tuesday. The map at shows temps as they relate to normal next Tuesday. 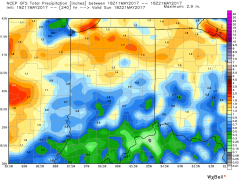 Our next chance of precipitation works in starting next Thursday afternoon. We can see scattered showers off and on from there right through Friday and then again Saturday afternoon and evening. The coverage amounts to no more than 40% of the state on any of those given days, and moisture totals will range only from a few hundredths to perhaps .4”. So, while this is not a big deal, it may be enough to slow or shut things down for a bit late next week. This also signals a return to a more active pattern from next weekend on. The map at right shows 10 day rain potential, which basically is a cumulative total of the rains from late next week through the weekend.

Monday through Wednesday (22nd through the 24th) we can’t get rid of scattered showers. Those may add another .2-.6” of moisture, even though daily coverage will be less than 50%. We don’t get to another dry period until after those rains.

Dryness develops for Thursday the 25th through Saturday the 27th, with warmer than normal temps and strong high pressure nearby. However, toward the end of the extended period, we see a strong system for the 28th-29th that brings rain in for the memorial holiday weekend. Rain totals can be half to 1 inch with coverage at 90% of the state.

After the active 11-16 day window, models suggest we move back to a drier pattern for the turn of the month and into early June. WE like temps in week three normal to below normal over the entire state, but we see precipitation normal to slightly below normal as well. In week four, we warm back up significantly, and will be above normal, but will continue to be drier. That means we should have plentiful windows for soybean planting after corn is done going forward.
Week 3

Below is the soil temperature map from this past week. We saw soil temps rebound back to above 50 degrees over northern locations this past week, but we did not really rocket higher. Corn that has emerged in many places is looking very, very yellow, a combination of being too wet, and way to cold. Soil temps will really start to move up in a hurry from Sunday through midweek this week, as air temps push 80 degrees. However, we will loose some of that upward momentum with rains late this week and into early next. Also, with week three temps cooler than normal, that will slow the build as well. But, this map does show some rebound from where we were at the start of the week.