GMO in the House 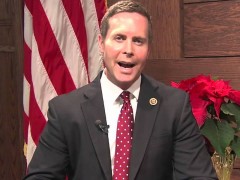 “Biotechnology has dramatically increased crop yields,” Davis said. “It has dramatically decreased loss due to pests and disease, and it allows us to feed more people without converting tropical forests or fragile lands in order to do so. So we save money and we save the environment and we save lives.”

However, Davis said he is “troubled” by the opposition to biotechnology.

“It is particularly troubling that a small minority has so confused the vocabulary of biotechnology as to threaten the development of the science and its role in feeding and nourishing our people, fighting disease, resolving the conflict between production agriculture and conservation, and doing all of these things with fewer farmers on less land.”

Most Democrat’s argue U.S. consumers want to know and have a right to know what’s in their food. Without some form of mandatory labeling, there would have been no Senate bill and nothing left for the House to consider. Mandatory is not the route American Farm Bureau’s Dale Moore was looking for.

“We continue to believe a voluntary approach makes more sense, but that’s not the option we have in front of us and so we’re working accordingly.”