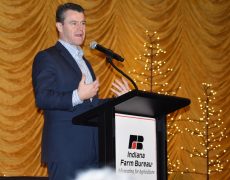 The expected vote this week on tax reform is expected to remain along party lines, but one Indiana Senator hopes that is not the case. Republican Senator Todd Young says the vote to reform the tax code for the first time in thirty years shouldn’t be strictly partisan.

“Barack Obama for years has supported a significant reduction in the corporate tax rate,” he said. “That’s a fundamental piece of this. Democrats support a whole lot of provisions in this and I would hope that the perfect isn’t the enemy of the good and Republicans and Democrats alike could be supportive of this bill because of the benefits it’s going to give to states like Indiana.”

Young says the bill is good for farmers, manufacturing and all Hoosiers, with a tax code “that is simpler, fairer, and allows all Hoosiers across income groups to keep more of what they earn. It will be especially important for our ag community and our manufacturers because this code will incentivize purchase of capital equipment, thus making our producers, whether it’s ag or manufacturing a lot more productive and therefore earn a higher wage.”

Senator Young spoke earlier in the month to the Indiana Farm Bureau members gathered for their convention in French Lick. Just prior to that address he also addressed NAFTA with HAT, commenting that renegotiating NAFTA is risky.

“Certainly don’t end it. Mend it, and there are provisions that have already been agreed to by Canada and Mexico that I think will ensure that NAFTA better serves Hoosiers and the rest of Americans, for example in the area of intellectual property protection which is very important to our ag life sciences industry here in the state. But what we don’t want to do is precipitously pull out or cause the other parties to pull out of this agreement.”

He said it has been good for agriculture, and although the U.S. must remain vigilant, Young is confident we can keep all of the parties together.

The Senator also commented on the Renewable Fuel Standard. He told HAT there is broad recognition that there needs to be more certainty in the annual volume requirements, so producers know what the demand will be each year. He said there are always opportunities to improve the regulatory burden of RFS, and Young is reaching out to stakeholders to help bridge the divide between the ethanol and oil refining industries.